The Bicycle Story: Bill Davidson on making bike frames in Seattle since the 70s 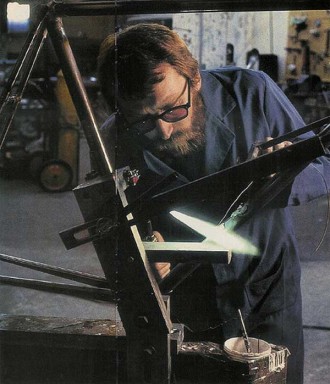 Bill Davidson has been building bike frames in Seattle since 1973, and he didn’t let little details like nobody here knowing how to do it (and, therefore, able to teach him) get in his way (Rodriguez and Erickson also started in 1973). So it should be no surprise that the closure of his longtime shop didn’t stop him, either.

As we reported previously, Davidson had to move his shop when Elliott Bay Bicycles near Pike Place Market closed its doors after 31 years. Davidson then formed a partnership with bike maker Max Kullaway of 333fab to open a new shop in Fremont. That shop has been operating for a couple months at 34th and Stone Way.

Josh Cohen caught up with Davidson recently and published a great interview with him at his blog The Bicycle Story. It’s a great look at what it was like to be on the frontier of craft bicycle making in America, based right here in Seattle.

How did you learn how to build bikes? There weren’t exactly UBI classes to take in the early 70s.

Interesting that you know that. A lot of people don’t know how difficult it was back then. Nobody here knew anything to show you. We Americans that started doing this back the are pretty much self taught or got a very, very brief education. Mine was extremely brief. I did have the advantage of having a dad who had a welding shop in Ballard, a neighborhood here in Seattle. I had some metal working experience to fall back on. But that didn’t mean that I wouldn’t make all the rookie frame builder mistakes back then. Again, no schools, no youtube, no magazine articles, no books. You just had to figure this all out yourself. Hopefully you would be a quick study and not make too many crazy mistakes along the way.

I spent a little time at a small shop in Liverpool, England called Harry Quinn Cycles. I suppose essentially I got one of those two week frame building classes. But they had no intention of teaching me. They just wanted to have me help them out doing grunt work and so forth while I was there. Some people called that an apprenticeship, but that was their words, not mine. I know how an electrician or a plumber or sheet metal apprenticeship works. My experience would not qualify as one. They were very friendly and interested in teaching me anything I asked, but they had to put money in the bank every week. No time to be teaching people that weren’t pulling their weight.

3 Responses to The Bicycle Story: Bill Davidson on making bike frames in Seattle since the 70s