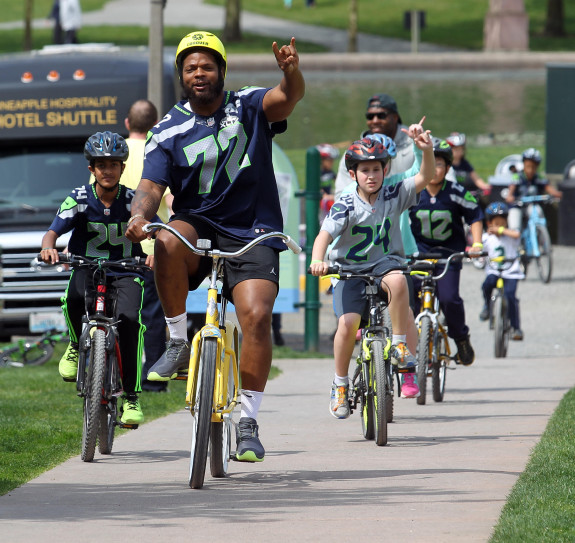 Photo by Corky Trewin, via the Seahawks.

Michael Bennett’s bike ride seen ’round the world (or at least the United States) sparked t-shirts, Internet memes and became a symbol for winning a seemingly impossible game after the Seahawks’ remarkable comeback win in the NFC Championship game.

The defensive end borrowed an SPD officer’s bike and took a joy ride around the field during the post-game celebration, to the chagrin of this devastated young Packers fan.

Almost immediately, Bennett turned the attention towards charity. He and Seattle Police auctioned off the bike he rode to benefit the Seattle Police Foundation and OCEAN, a charity that fights childhood obesity.

Now, Bennett has launched his own charity foundation taking aim at childhood obesity, and he kicked it off with a community bike ride. Number 72 rode his bike around Bellevue’s Downtown Park with a group of kids from the Boys & Girls Club of Bellevue.

Here’s a short video from the event by King 5:

Founder and Editor of Seattle Bike Blog.
View all posts by Tom Fucoloro →
This entry was posted in news and tagged bellevue, king 5, michael bennett, seahawks, the bennett foundation. Bookmark the permalink.