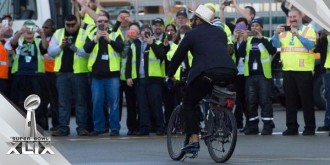 Bennett rides a bike again, this time during the team’s sendoff celebration as they head to the Super Bowl. Image from the Seahawks

Michael Bennett’s bike ride after the NFC Championship game quickly became an iconic image of the moment. And now the Seattle Police bike he used for his joyride around the field will be auctioned for charity.

The Puget Sound Business Journal has the details:

The Seattle PD bike is stuck in a bit of a bureaucratic mess for now, as a government agency isn’t allowed to just give away equipment. But all that should be cleared up in time for it to be auctioned at a charity event on Feb. 7, according to police spokesman Det. Drew Fowler.

Half of the proceeds will go to the Seattle Police Foundation, an independent nonprofit that supports the department, and half will go to a charity Bennett works closely with to fight childhood obesity, OCEAN.

The bike will be auctioned at the Evening of Hope February 7.

This entry was posted in news and tagged michael bennett, seahawks. Bookmark the permalink.