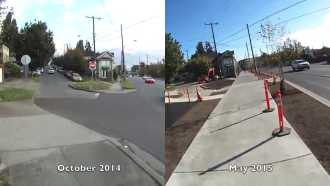 Screenshot from video by Jake Vanderplas.

The city has finished widening a heavily-used trail connection at the north end of Delridge Way in West Seattle.

The new, wider trail connects most of the way from SW Andover Street to trail connections under the West Seattle Bridge that lead downtown, to Alki and down the Duwamish River. The changes also tightened up and raised a crossing at the low-traffic residential 23rd Ave SW.

Before and after on the new Delridge/West Seattle Bridge bike path. Much improved – thanks @SeattleDOT! http://t.co/munrfYyXPP #SEAbikes