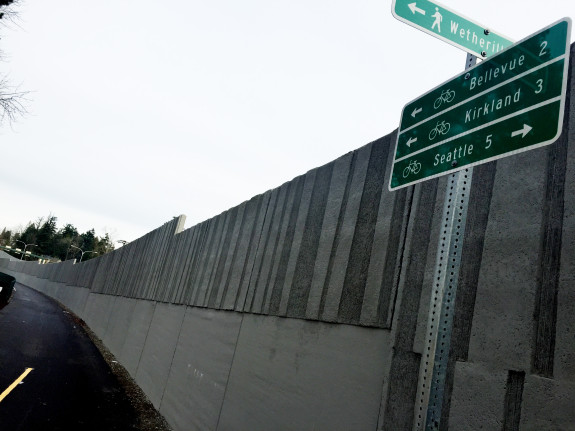 The 520 highway expansion project is a $4.47 billion investment mostly focused on car travel. The planned connections into Seattle remain unfunded by at least $1.6 billion, and the state’s Seattle designs still present a lot of walking and biking safety challenges in Montlake (more on that soon). But let’s ignore all that for a just a moment and focus on a truly awesome element of the megaproject: A wide, grade-separated 520 Trail.

As WSDOT wraps up major work on the Eastside 520 corridor, the new center-lane bus stops, park lids and trail connections are now open between Lake Washington and I-405. It’s a sea of concrete with a wide, grade-separated walking and biking path attached to it that feels more like a bicycle freeway than a trail.

Until planned connections to Seattle and the rest of the existing 520 trail east of I-405 are completed, the trail really serves mainly as a local access and recreation path. But it’s not hard to imagine a busy mix of commuters, school kids and folks just out for a stroll when this new trail becomes the most direct connection between Seattle, Kirkland, north Bellevue and Redmond.

Here’s a look at how the new trail works. 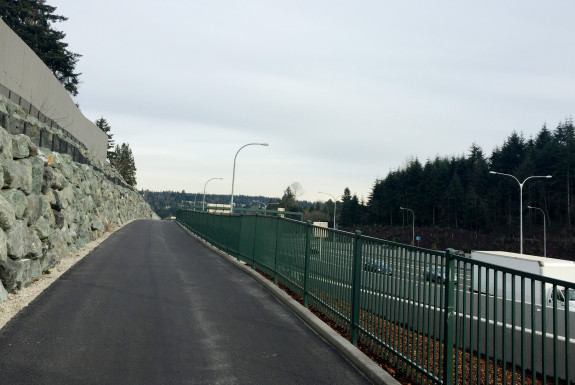 The trail is fully separated, sometimes separated from the freeway by a wall, sometimes by a fence. It’s not exactly a journey through nature, but what did you expect from a freeway trail? It is, however, direct and grade-separated from even relatively low-traffic cross-streets. 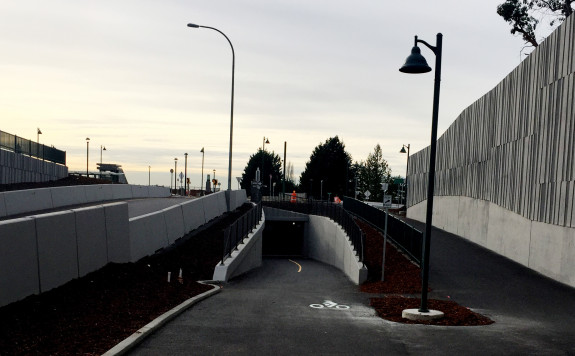 But don’t expect the ride to be as flat as a rail trail (like the Burke-Gilman or the Cross Kirkland Corridor). The grades are as gentle as possible given the hilly terrain, but you will still need those low gears for a couple climbs. 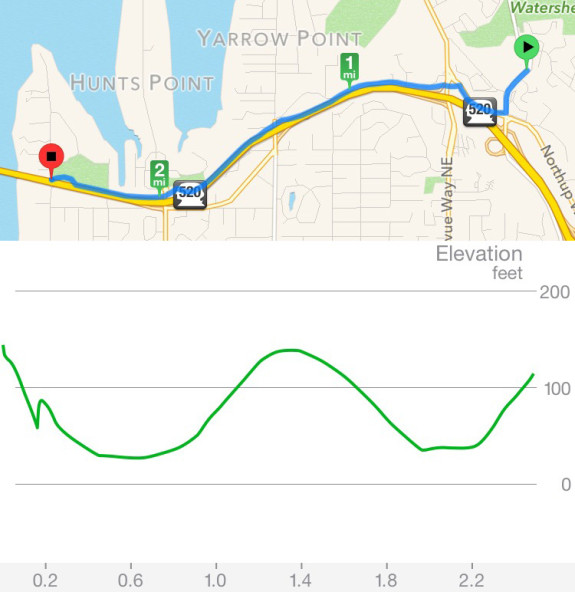 Since I biked east-to-west when capturing this data with my phone’s GPS, you have to read the elevation graph backwards. Oops.

If you don’t live in the area and want to try out the new trail, one easy way to get there is to throw your bike on any bus heading across the 520 Bridge. Get off at the first stop next to the lake (Evergreen Point) and take the elevator up to check out the new lid park and the overlook towards Seattle. From there, you can watch construction work on the new floating bridge that will someday include a half-century-overdue biking and walking connection. 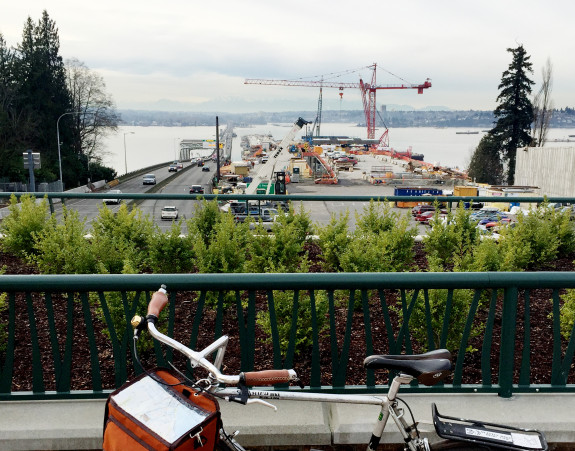 UPDATE: WSDOT tweeted a photo of progress on the floating bridge trail:

Sneak peek at the walk and bike path under construction on the new bridge! @SNGreenways @CascadeBicycle pic.twitter.com/GFnEakZhV5

The trail includes connections into Yarrow Point, Hunt’s Point, Evergreen Point, Medina and other neighborhoods along the 520 corridor. If you stay on the trail, it unceremoniously ends at 108th Ave NE, a couple blocks downhill from the South Kirkland Park-and-Ride and the start of the brand new Cross Kirkland Corridor Trail. After years (decades?) of imagining all these vague possible trail connections, they suddenly seem very close and real.

But today, the new section of trail does not connect to the rest of the 520 Trail between Redmond and I-405. There is about a mile gap that requires some uncomfortable biking on Northrup Way. The City of Bellevue has received funding for its plans to redesign the street and add skinny painted bike lanes connecting the two pieces of the 520 Trail (Crosscut reports you will have to wait until 2017 for the changes to be complete).

While the changes will certainly make the street more comfortable than it is today, they will fall short of creating a trail connection that is safe and comfortable for people of all ages and abilities. Makes me wonder if it is too late to add barriers to separate the planned bike lanes from the street’s busy traffic. Here’s what current plans will look like, from Bellevue’s project webpage: 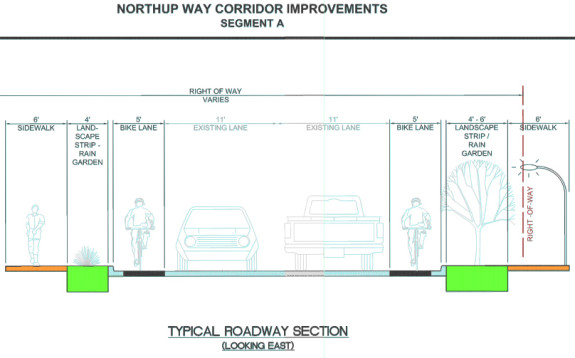 For more thoughts on the new 520 Trail section, check out posts from Crosscut’s Greg Shaw and Biking Bis.

Have you tried out the new trail? Let us know your thoughts.