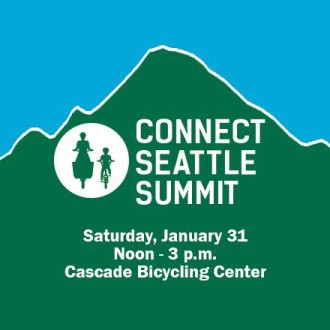 Do you read this blog and feel like maybe you could help make streets in the Seattle area safer or area bike routes better connected? Well, Saturday is a great chance to meet people from all corners of the city and region to look ahead at the upcoming year and plan how to make it happen.

Cascade Bicycle Club is organizing a Connect Seattle Summit, bringing together the club’s various Connect advocacy groups and other safe streets groups like Seattle Neighborhood Greenways for an afternoon of strategizing and networking.

The summit will go from noon to 3 p.m. at the new Cascade Bicycling Center in Magnuson Park. You can RSVP online here. If you want to bike to the summit with other folks in your neighborhood, group rides are being organized from all over.

Join your neighbors from across Seattle to set the priorities and to get energized for Connect Seattle’s organizing in 2015.

Connect Seattle is Cascade’s grassroots effort to create the public support necessary to build 250 miles of new protected bike lanes, neighborhood greenways and trails within the next decade.

2015 will be a big year to move us toward that goal. There’s neighborhood projects like expediting fixing the Missing Link, designing a complete network of Downtown protected bike lanes, and making Rainier Avenue safer for people walking and biking. There’s the Neighbors for Vision Zero campaign. There’s big funding issues like renewing the city’s transportation levy. And then there’s electing city councilmembers for the first time in seven new council districts.

On January 31, hundreds of Connect Seattle volunteers and Seattle bike activists will come together to energize, prioritize, and plan our year.

In addition to our current Ballard, Downtown, Portage Bay, Southeast, and Westlake teams, we’ll also be launching teams for Northgate and White Center and partnering with West Seattle Bike Connections and Seattle Neighborhood Greenways to make our goal of 250 miles of new bikeways a reality.

Be part of it. Join us on Saturday, January 31.