Parks Board wants more MTB and walking trails in Cheasty 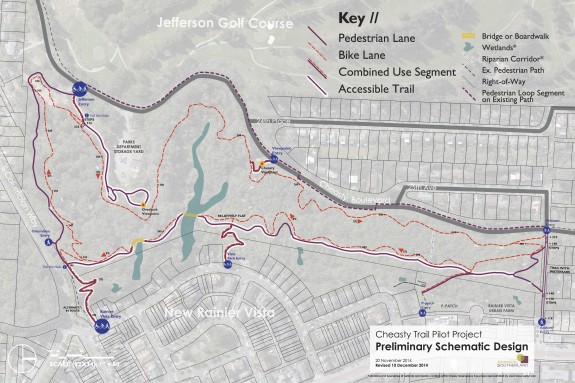 Developing plans to create new walking and mountain bike trails in the overgrown Cheasty Greenspace between Rainier Vista and Beacon Hill has run into a problem: The proposed plan may not include enough trails to meet the project’s goals.

That’s the essence of a recent letter (PDF) from the largely advisory Board of Parks Commissioners to members of the City Council and the Mayor asking for more guidance on the scope of the controversial pilot project approved over the summer. The pilot is designed to see whether building trails for walking and mountain biking through undeveloped green spaces could be a sustainable way to increase access to natural spaces, defend urban forests from destructive invasive species, provide safe routes to school and improve public safety.

That’s a lot of goals to accomplish with just a few trails, but the extremely active and engaged supporters and volunteers powering the project are determined to make it happen, including Eagle Scout candidate Chiem “Oou” Saeteurn as shown in this video:

However, there are people who do not like the project, mostly citing environmental concerns.

“If human activity increases within Cheasty Greenspace, it is likely that the wildlife will suffer,” according to the petition. As of press time, 464 people has signed this request to only build walking trails. 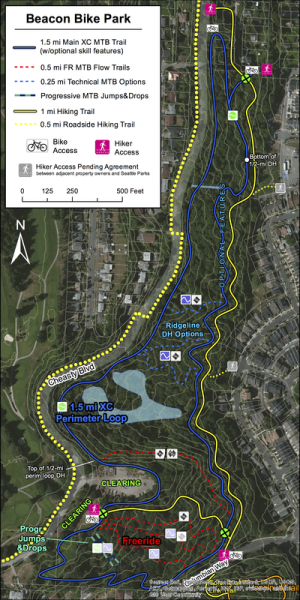 The original trails proposal. From the Beacon Bike Park website

But the Parks Board sees the opposite problem. Where the original plan included biking and walking trails around the perimeter of Cheasty and through parts of the center, plans were scaled back to just include the perimeter trails (pictured at the top of this post) as something of a compromise.

However, the Parks Board is concerned that some of the project’s major goals would not be met by just a perimeter trail. Here’s how the Board outlined their concerns (see their full memo (PDF) for more background):

If you are interested in getting involved, the fourth of five Project Advisory Team meetings is 6 p.m. tonight (Thursday) at Jefferson Park Community Center.

Founder and Editor of Seattle Bike Blog.
View all posts by Tom Fucoloro →
This entry was posted in news and tagged board of parks commissioners, cheasty greenspace, cheasty greenspace mountain bike pilot project. Bookmark the permalink.