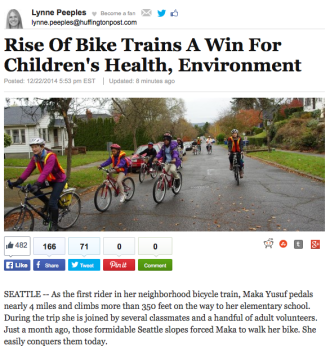 The Huffington Post has a great profile of some of Seattle’s bike to school efforts and research by Seattle Children’s to learn more about its effects on students.

We have written many times about Seattle’s bike to school revolution. It’s one of the coolest things happening in the city in recent years as schools and parents work to make it possible for students to get to school under their own power.

Great community organizing, leadership from major organizations and new city investments in Safe Routes to School are not only changing the way kids get to school all around the city, but also how healthy they are and how ready they are to learn when the class bell rings.

Seattle Children’s researchers are trying to learn more about the effect of a bike train program on students health. We reported previously about the research project, led by Dr. Jason Mendoza and Maya Jacobs. Huffington Post reports that their first research effort is entering the number crunching phase, and they already have hopes to expand it:

As the first rider in her neighborhood bicycle train, Maka Yusuf pedals nearly 4 miles and climbs more than 350 feet on the way to her elementary school. During the trip she is joined by several classmates and a handful of adult volunteers. Just a month ago, those formidable Seattle slopes forced Maka to walk her bike. She easily conquers them today.

“Bike trains seem like a small-scale local solution to some huge global issues we are facing right now,” said Maya Jacobs, a bike train leader and researcher at Seattle Children’s. “And kids somehow just love biking to school. Even in pouring-down rain, they think this is the best thing ever.”

Maka’s bike train represents the second phase of Mendoza’s research project. As the researchers did with a separate pair of Seattle-area schools in the spring, students from Madrona K-8 and Dunlap Elementary School were outfitted with activity and GPS monitors, as well as new bikes and helmets that they can keep. Dunlap served as the control group: participating students got bikes, but did not have an organized bike train. With Madrona’s last organized bike train ride now complete, Mendoza and his team are preparing to crunch the data, and expect to have results by the spring. He added that their ultimate goal is to do a larger study — enrolling students from, say, 20 schools — across different cities, and with a variety of terrains and cultures.

The story also gives a nod to longtime bike to school advocate Anne King, who lives in Northeast Seattle and was one powerful force behind the very successful Bike to Bryant Elementary efforts:

Anne King, who runs a local bike education and consulting business, added another benefit to the list: “It teaches kids about independence.”

“It’s good for them to learn how to get places on their own, walk in their neighborhood, interact with their neighbors and community,” said King. “When you’re in a car, it’s completely different.”

Her 6th-grade son likes biking to school, she noted, partly because it is actually faster than taking the school bus. But traffic leaves King and her husband too nervous to let him ride on his own. Concerns about getting hit by a car continue to keep many kids — and adults — from choosing to bike or walk.

This is a good chance to report one of my favorite ever Seattle Bike Blog videos (featuring Anne King, in fact!):