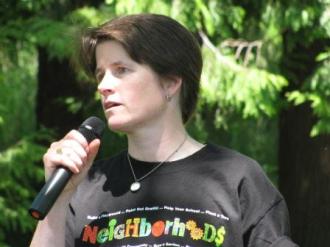 Seattle City Councilmember Sally Clark was driving in Tacoma looking for a church when she made a left turn directly into the path of someone biking back in May 2012. Steve Fairbanks had the right of way and had no time to stop before colliding with the side of Clark’s Ford Escape, seriously injuring his left leg.

Fairbanks’ recovery has been long and painful, and his leg has been left permanently deformed. He has also lost sensation in places and deals with chronic pain, according to a claim filed against the City of Seattle this month.

Clark was acting in her official capacity when the collision occurred, opening the city to legal liability for any costs beyond the meager $25,000 covered by her car insurance.

Clark had not spoken publicly about the incident until Tuesday, when the lawsuit brought the incident to light two and half years later. She said she did not see Fairbanks before turning in front of him.

“I was in my personal car and taking a left turn just before arriving at the location,” Clark wrote in a statement reported by the Seattle Times. “I did not see an oncoming cyclist and he didn’t have time to stop before running into my passenger side door. I and others immediately called 911 and stayed with the cyclist until he was taken to the hospital. He had a clearly broken leg.”

Both Clark and Fairbanks were traveling on South 9th Street when Clark turned left onto South Market Street. Here’s a view of the intersection as it was in 2012:

Fairbanks is seeking $2.5 million in the claim. If a settlement is not reached, it could turn into a lawsuit against the city.

“This was an accident and a reminder of how quickly something like this can happen,” Clark wrote in her statement. “ As a driver and a cyclist — who rides my bike to work not often enough — I continue to be shaken by what happened. I’m thankful (if that’s the right word) that what was a bad outcome for the cyclist wasn’t worse.”

Of course, as a councilmember in a major city where a lot of people bike to get around town, Clark is in a special position to do more than simply apologize and pay her ticket (the Vulnerable User Law did not go into effect until a couple months after the collision, so the question of whether or not that law could have been applied in this case is irrelevant). While she has supported investments in cycling when they have come up for a vote, there is a whole lot of work to do before the city is truly bike-friendly.

Clark now knows firsthand what can happen when a dangerous street design is allowed to persist. Tacoma’s South 9th Street was and still is a four-lane street through a commercial area. Seattle has many streets like this desperately in need of a complete streets redesign.

Much like the collisions that killed Mike Wang and seriously injured Brandon Blake on Dexter Ave, people turning left from four lane streets have more pressure to make a quick turn and have less of a chance to see people on bikes heading in the opposite direction. Though Fairbanks’ injuries are bad, he is lucky compared to Blake and especially Wang. But it could easily have been even worse.

Clark lives in Rainier Valley, where the community and SDOT are trying to figure out how to prevent the huge number of collisions and injuries that happen on that four-lane street, which passes through several busy business districts. Speeding is rampant, and the street stands out as the most dangerous neighborhood street in the city.

Mayor Ed Murray attended a recent community meeting about it and stayed to listen to people’s concerns for the remainder of the meeting. The street is going to need bold action on the part of the city if it is going to become the safer and more complete street it should be. If the city does not take this action or their action is far insufficient to treat the core design dangers, then there will be more people injured and more people like Clark who were responsible for those injuries simply by making a driving mistake.

But these injuries will not be “accidents,” because the word accident implies that they were unavoidable. If the city can make the street safer and chooses not to, those injuries will be at least partly the city’s fault. And this is where Clark has a unique opportunity to take action.

The Seattle Times asked Clark whether she was worried the news of her collision will impact her standing with biking voters:

“Were I not a cyclist there might be some more traction with that,” [Clark] said.

“I’ve been a part of a lot of those conversations in trying to figure out how we make the investments in infrastructure and education in Seattle for everybody. I biked to work yesterday,” Clark added.

“I’m happy for the infrastructure that Seattle has and we need more of it and more recognition of sharing the road. But that’s a little bit separate from a particular, discrete accident,” she said.

While Cascade Bicycle Club was quick to absolve her of political responsibility — telling the Times “this could happened to anyone” — I don’t think the safe streets voters will actually be so forgiving. Instead, I think Clark is going to need to go above and beyond to be a leader on the issue of safe streets if she doesn’t want people to remember this when filling out ballots next year.

And Rainier Ave is the perfect chance for her to demonstrate this leadership by going out and spreading the word to her neighbors and gather support for the tough changes the city must complete there. Because while most people in her situation can do little more than say sorry and accept the tickets and legal ramifications of their mistakes, as a City Councilmember, Clark can do much much more. And she should.

Founder and Editor of Seattle Bike Blog.
View all posts by Tom Fucoloro →
This entry was posted in news and tagged injuries, sally clark, tacoma. Bookmark the permalink.