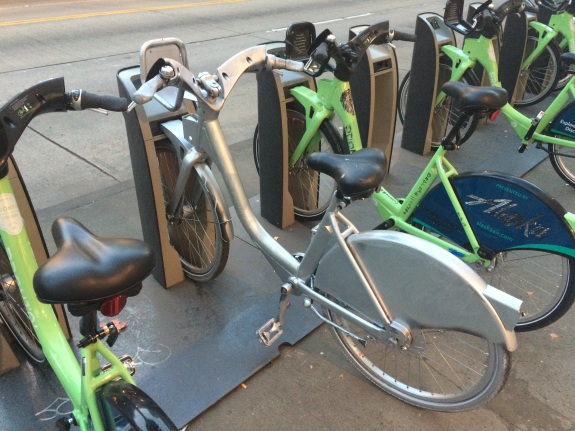 Pronto Cycle Share launched in October, introducing 500 identical green bikes on the streets of Seattle. But I guess they’re not all identical anymore.

Police are seeking a man they say vandalized two Pronto bikes, painting one entirely silver and writing all over the other with a permanent marker. Damages are estimated at around $1,250 in part because the silver bike may not be salvageable.

Police say the man used the same credit card to check out both bikes.

Like anything in public space, Pronto does expect some vandalism to equipment. And some of it is fairly harmless, like this Mike Tyson sticker. And with Alaska Airlines in the protest spotlight over $15 minimum wage issues (Councilmember Kshama Sawant was arrested last week protesting at their headquarters), I have wondered if the bikes could become targets.

The recent vandalism, however, does not appear to have a clear message.

So, to recap: Don’t vandalize Pronto bikes. Pronto has to pay to repair them, not Alaska Airlines. But if you absolutely have to do something, at the very least don’t damage the working parts.

Police are searching for a velocipede vandal who rented two bikes from a Seattle bike share company last week, only to return them hours later covered in paint and scrawled messages.

The suspect first rented one of Pronto’s bright-green custom-made bicycles from a bike station at 3rd Avenue and Pike Street around 5 AM on November 13th. Six hours later, he returned the bicycle to the same location, after scrawling messages and strings of numbers in permanent ink on the bike’s frame.

Around 2PM that afternoon, the same suspect rented a second Pronto bike at Westlake Ave N and Republican Street and spent two hours coating the bike in silver paint. The suspect then returned the repainted bicycle to the Westlake and Republican station.

The two incidents caused an estimated $1250 in damage.

Police believe both bikes were vandalized by the same man, as it appears he used his credit card to rent both bicycles. Detectives are still working to locate the man.

When asked whether he believes crime and art can ever be the same thing, Det. Young paused for a contemplative moment. “It’s all about permission,” he said.

11 Responses to Police looking for person who painted, scrawled messages on Pronto bikes