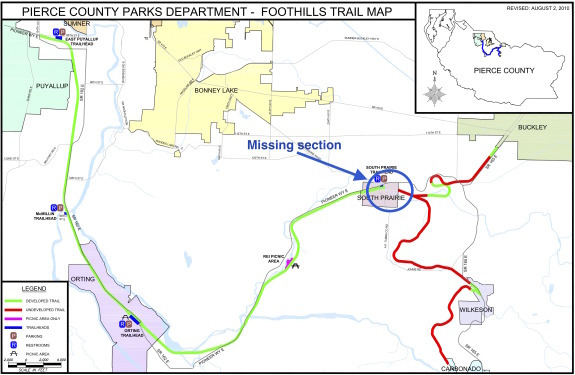 The Pierce County Council has started the process of condemning about an acre of property needed to complete a key section of the Foothills Trail more than 25 years after work on the trail began, The News Tribune reports.

The move comes after property owners refused to negotiate a fair price with the county, according to members of the council. Negotiations with one property owner, Doug Dickson, have been ongoing since 1995. Some property owners claim the county low-balled them. But everyone seems to agree that the negotiation points were nowhere near each other, so now it goes to the courts to come up with a fair figure.

People have been working to get this trail built for so long that many of them are no longer with us. But once completed, the trail will stretch from Puyallup to Enumclaw. There is still a bit of work to get there as some sections have not yet been paved and there needs to be a bridge between Buckley and Enumclaw.

But the Pierce County Council wants it to happen, and local leaders see the trail as a potential boon to their economies. From The News Tribune:

Buckley Mayor Pat Johnson said said she’s optimistic the completed trail will bring new businesses to Buckley, as it already has to Orting.

“For us, it will hopefully be part of our economic survival,” Johnson said.

She said Buckley is working with the City of Enumclaw and King and Pierce counties to add a pedestrian bridge across the White River to connect with the Foothills Trail in Enumclaw.

King County already owns the right of way to continue the trail on to the Maple Valley area.

“The section that we are looking at completing now will be part of a much larger picture in the future,” Johnson said.

Buzz Grant, president of the Foothills Rails-to-Trails Coalition, said there were many people who “started out with this concept of this trail back in the ‘80s and they’re not with us anymore.”

“We’re dying to get it done, I guess,” Grant said. “It’s time for the courts to sort this thing out.”