Supreme Court decision could impact several WA trails, but most should be safe 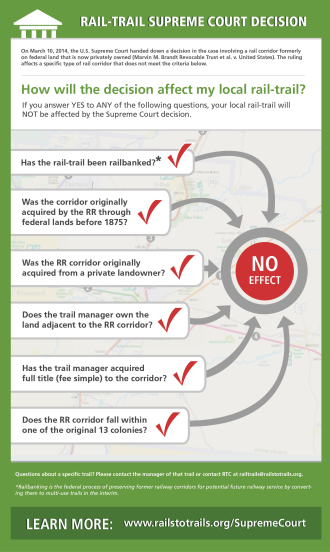 Chart from the Rails-to-Trails Conservancy

The US Supreme Court handed down a nearly-unanimous decision this week that could spell trouble for some Washington State rail-trails, including parts of the John Wayne Pioneer Trail and the Foothills Trail. But contrary to some early reports, the reach of the decision is limited to only certain federally-granted rail corridors. Most of the state and region’s rail-trails should be unaffected.

The exact reach of the decision is not yet known, as lower courts still need to figure out what to do with the Supreme Court’s 8-1 decision (PDF) siding with a Wyoming landowner trying to regain control of a stretch of the Medicine Bow Trail that crosses the estate’s property. We reported on the case back when it went to the Supreme Court.

What we do know is that the decision only affects sections of trail in which land was sold to private owners during a specific timeframe while a later-abandoned railroad still operated on it. In essence, the private landowners claim that once the railroad was abandoned, ownership reverted to them. Rail-Trail advocates argued that the corridors reverted to the Federal government. The Supreme Court agreed with the private owners.

In the case of the Foothills Trail in Pierce County, efforts are already underway (and have been for some time) to purchase right-of-way needed to complete the trail. Obviously, this increases the cost of trail projects, and the decision to sell is at the discretion of the current owner. But it could be the necessary way forward for some trails, which is certainly disappointing for many communities.

Rail corridors are incredible opportunities for trails because they are continuous and have level grades. One missing section, no matter how small, can diminish the value and public benefit of the entire corridor.

Washington Bikes is gearing up its bike tourism efforts around the state, hoping to make bicycle travel an economic boon for communities across Washington and expand statewide support for bicycle safety and access projects. Blake Trask from WA Bikes says that his organization and other partners will be diving into what the decision means for these vital state trails, but the full scope of the decision’s affects are not yet known:

Washington Bikes will definitely be working on ensuring that existing and future trails in Washington are preserved. We expect to collaborate with a wide range of stakeholders statewide, including Cascade Bicycle Club, trail advocates, and many others who care about these trails from the private and public sectors. Unfortunately, the fact that this ruling applies to a very specific set of rail easement means we don’t yet have a handle on the scope of the problem. Additionally, since the case has now been remanded down to the lower court for additional scoping, there’s still a significant to-be-continued aspect to this case.

4 Responses to Supreme Court decision could impact several WA trails, but most should be safe