US Supreme Court hearing case that could impact Washington rail-trails 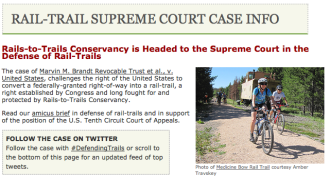 The Rails-to-Trails Conservancy is leading efforts to argue that certain parts of former railroad right-of-way land legally reverted into Federal ownership and not private hands.

The case is specifically about a section of rail corridor in Wyoming that is home to the Medicine Bow Trail, but the decision could have implications for Washington State’s John Wayne Pioneer Trail and sections of other rail trails all over the country.

SCOTUSblog has a good primer on what is at issue in the case and what factors the Supreme Court must weigh:

The dispute, in fact, is a classic one of competing interests: the personal right to own property free of restrictions that the government may assert, perhaps belatedly, versus the government’s obligation to manage the public lands to maximize policy goals to serve a supposedly larger community of interest.

A central point of legal conflict arises from the fact that the 1875 [Railroad Right-of-Way] Act does not, explicitly, contain language to settle the dispute about a federal “reversionary interest.”  For some Justices, who refuse to rely on background history of legislation, that will pose a dilemma.  For them, then, the emphasis probably will be on prior Supreme Court precedents.  The federal government has made an unapologetic plea to interpret what Congress meant by examining the legislative process that led to the 1875 Act.  Indeed, that history may be essential to the government’s case, at least so far as the 1875 Act is the focus.

Lurking somewhat in the background of this case is the federal government’s “rails to trails” program — very popular with outdoor enthusiasts, conservationists, and local governments.  A ruling for the Brandt trust, depending on how far it went to confine the federal claim that ownership of rights-of-way reverts to it, could intensify ongoing legal battles over the lands lying in former railroad beds and nearby.

Whether a railroad or a trail, continuity of the corridor is vital to its success and usefulness. Obviously, a rail/trail corridor with even the tiniest section missing loses a huge amount of its community benefit.

The John Wayne Pioneer Trail is the longest rail-trail in the nation, and it has huge potential to be a destination route for bike tourism in our state. But if sections of the trail are closed off from public access, the benefit to state tourism and recreation could be significantly impacted.

Not only that, but a decision against rail-trails could have unknown implications for the future of the nation’s rail-trail program. Since our nation needs more trails, not fewer, this decision could be huge.

Founder and Editor of Seattle Bike Blog.
View all posts by Tom Fucoloro →
This entry was posted in news and tagged john wayne pioneer trail, rails to trails, us supreme court. Bookmark the permalink.