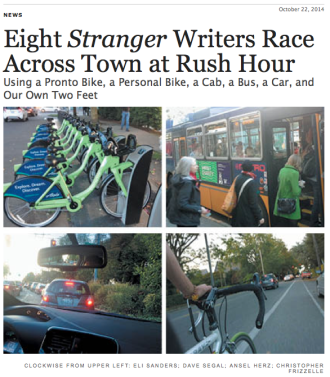 Screenshot from The Stranger. Click to read the full story.

Eight writers for The Stranger raced from their Capitol Hill office to a post-work drink in the U District, each taking a different mode of transportation (personal bike, Pronto bike, bus, Lyft, Car2Go, personal car, and feet). Oh, and it was rush hour.

It was a Stranger-style modal race, a fun way to compare travel times, experiences and costs in a real-world setting. Typically all users go at a normal pace and follow all traffic laws. It’s not the participant racing, it’s the mode itself.

Check out how everyone did. I also like how they reviewed their trips, an element that is often left out of modal races like these.

Of course, Ansel Herz won by taking his own bike on the mostly downhill route, cruising past lines of stopped traffic on the way. In fact, he won by a long shot (15 minutes, which makes me think he did sort of step on it).

But even if you don’t ride fast, bikes are often the fastest way to get around town, especially within a few miles of the city center. This fact seems to surprise a lot of people who have never tried biking as a means of transportation.

One of the most common stories I hear from people who try biking to work for the first time is that they leave home super early, thinking it will take a while to get there. Then they pull up to work, check the time and realize they have a lot of time to kill. People like to think that the speed of a mode is about the top speed it reaches on a straightaway, but the only think that really maters is time elapsed from door-to-door. Searching for parking and waiting in lines of traffic adds up.

This race should definitely be repeated in 2016 when U Link opens. Imagine hopping a Pronto to Capitol Hill Station, taking the train underground, then hopping a Pronto from there to the bar. That might even beat biking all the way if the train timing works out.

Speaking of Pronto, Eli Sanders had a bit of trouble checking one out and getting the seat adjusted, so it didn’t do so hot (32 minutes). But hey, it still beat taking a cab or walking (at least in terms of time, Paul Constant’s 55-minute walk did sound rather pleasant).

As a final note, as with a similar modal race by the Seattle Times earlier this year, the cost estimate for the private car trip is artificially low. Only calculating gas and parking leaves out a ton of car ownership costs, like buying the car itself (or making lease payments) and paying monthly for car insurance and all those car mechanic bills. Cars are hella expensive, but they somehow feel cheap to use. After all, you’ve already sunk all those other costs. It’s a strange and twisted mind game car culture plays on us.

Founder and Editor of Seattle Bike Blog.
View all posts by Tom Fucoloro →
This entry was posted in news and tagged modal races, the stranger. Bookmark the permalink.