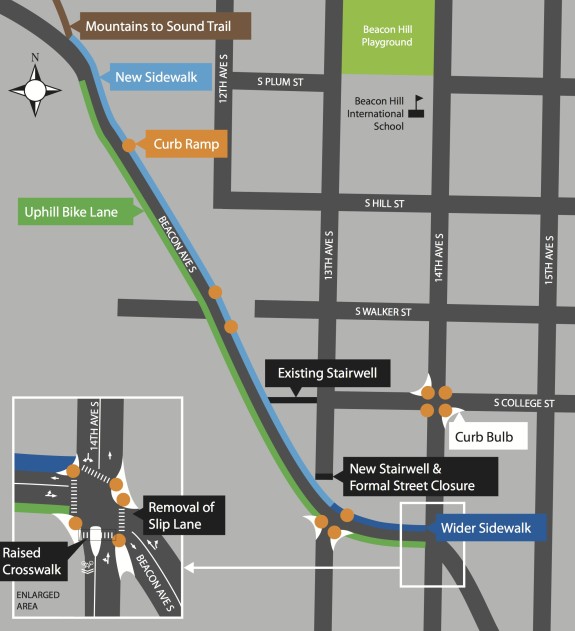 Work is set to begin next month on a slate of road safety improvements in North Beacon Hill, mostly focused around Beacon Ave S between 14th Ave S and the Mountains to Sound Trail end point just east of I-5.

The project consists of two extremely-needed improvements and a bunch of smaller ones. The largest change will be the addition of a sidewalk to finally connect the neighborhood, the S College Street stairway and the Mountains to Sound Trail endpoint.

The city will also add a bike lane up the steep climb from the trail to the neighborhood center. While this won’t flatten the monster hill, at least people biking up from the trail (or Sodo via the Holgate overpass) will have some extra dedicated space to take their time.

This could be built in 2015, pending funding

The city also notes that a future project could build a continuous sidewalk ramp down to Holgate in place of the current staircase. That project could be built in conjunction with a Seattle Public Utilities waterline project next year if funding is found to make it happen. See this post for more about the Holgate overpass stairway problem.

But perhaps the best part of the whole project will be the changes to the huge intersection at 14th Ave S. Today, it looks like this: 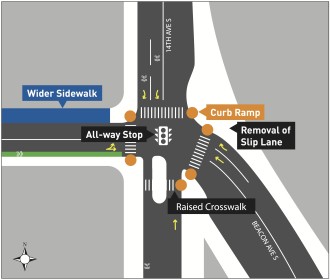 Is that a highway on-ramp? Nope! It’s actually the way to Beacon Hill International School.

Note that if you want to walk from the southeast corner of the intersection (the gas station in this south-facing image) to the northeast corner, you have to walk across three crosswalks including one monster crosswalk that is about 70-feet wide. This is no way to build streets where families live.

The new and greatly-improved intersection would tighten-up all the corners and remove that highway-style “slip lane” that currently encourages high-speed right turns across the wide crosswalk from Beacon Ave to northbound 14th Ave. This will also create some extra sidewalk space.

The project also includes a raised crosswalk and traffic diverter on 14th Ave south of the intersection. This diverter allows people driving to exit but not to enter, a measure that should prevent southbound cut-through traffic on this residential stretch of 14th Ave S. People biking will be able to continue south on 14th, which sets the stage for a potential neighborhood greenway connection.

Speaking of which, the city is working through the design for a trail connection around the west edge of Jefferson Park (running next to the food forest!) following a gravel service road that will offer a less hilly and more direct connection in the middle of the Beacon Hill neighborhood greenway. Put this together with a new neighborhood greenway connection up 14th, and you can see that the totally awesome Beacon Hill Family Bicycle and Pedestrian Circulation Plan is really starting to take form.

This is what happens when engaged supporters of safe and fun neighborhood streets get support from their city.