A statistical analysis of biking on the Fremont Bridge, Part 3: Bike Month

EDITOR’S NOTE: This is the third in a four-part series of posts this week by statistician Mike Logsdon. Mike bikes across the Fremont Bridge every day, and put together this analysis of the bike counter data “mostly for the amusement of friends and coworkers.” Note that at the time Mike did this analysis, the 2014 Bike Month data was not yet available. So this post only looks at 2013.

The Cascade Bicycle Club promotes May of every year as Bike Month. Local businesses sign up teams of bicycle commuters for the commute challenge, and the Cascade Bicycle Club offers a variety of events, incentives, and aid to raise awareness and promote bicycle commutership. Obviously the benefits are numerous to everyone: Bicycle commuting boosts the health of the participants and takes cars off the roads. But how much do these efforts actually modify commute habits?

To make fair comparisons, we consider “residual” trips. Residual trips represent the difference between the observed number of crossings by bicycle and some expected number given the season and the weather. Intuitively, we expect lots of riders on a sunny day in June and few riders on a rainy day in January, so we need to account for that when making comparisons. A particular week may have seen unusually high rates of bicycle crossings, but perhaps that week experienced unusually pleasant weather. Fair comparisons adjust for the season and the weather, and we do so by fitting a regression model to calculate “expected counts”, then investigate the differences between observed counts and expected.

If commute rates during Bike Month consistently and emphatically exceed the expected rates, then we can conclude that the Cascade Club advocacy proved fruitful. As a demonstration, Figure 4 shows the daily observed counts, with a squiggly line showing the expected counts. The regression model is the same as that in the previous section, when it was used to estimate the effect of rain. 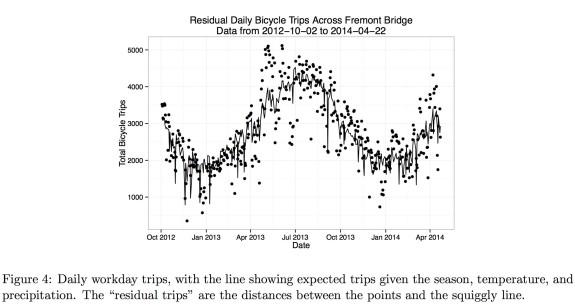 Well… see Figure 5. Bike Month 2013 started with a bang; people were excited to bike to work! The first few weeks of the month saw bridge crossings routinely between one thousand and fifteen hundred riders per day above expectation given weather alone. However, commuters seemed to lose interest and momentum by the end of the month, when Fremont bridge crossings returned to normal, or even possibly a bit below normal. 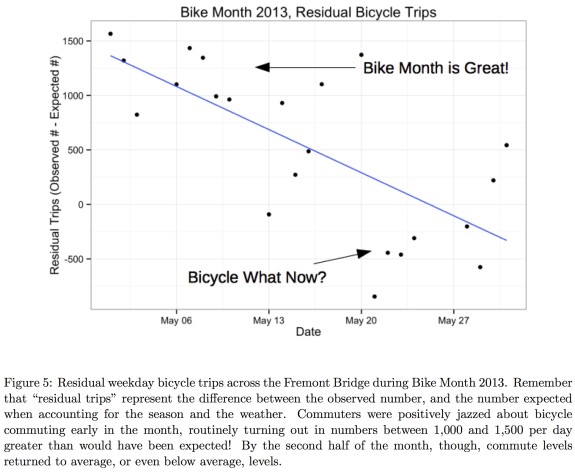 Returning to the regression model of the previous section, we can assess statistically whether the Cascade Bicycle Club’s advocacy encouraged bicycle commutes, at least across the Fremont Bridge. Adding an additional binary term to the model – indicating whether the day fell within Cascade Bike Month – yielded an estimated bike month effect of 675 riders per day, with 95% interval (430, 920). Although the detailed look revealed a late decline, total Bike Month bicycle trips across the Fremont bridge significantly exceeded what would have been expected given season, temperature, and precipitation alone.

In the next and final part of the series, we will look at whether the number of people biking over the bridge is increasing.

Mike Logsdon works as a statistician for Ecotope, Inc. He bicycles twice daily across the Fremont Bridge, rain or shine.
View all posts by Mike Logsdon →
This entry was posted in news and tagged A statistical analysis of biking on the Fremont Bridge, bike counter, bike month, cascade bicycle club, fremont, fremont bridge, mike logsdon. Bookmark the permalink.

9 Responses to A statistical analysis of biking on the Fremont Bridge, Part 3: Bike Month