A statistical analysis of biking on the Fremont Bridge, Part 2: Rain

EDITOR’S NOTE: This is the second in a four-part series of posts this week by statistician Mike Logsdon. Mike bikes across the Fremont Bridge every day, and put together this analysis of the bike counter data “mostly for the amusement of friends and coworkers.” I hope you enjoy it as much as I do.

Seattleites talk a tough game with the rain. We proudly eschew umbrellas and hoods, and claim not to be bothered by showers and gloom. But how true is that? Do we really treat the rain like the bishop in Caddyshack golfing the round of his life? Or do rainy days send Seattleites running for the relative comfort of cars and busses?

To answer this question, we can merge the bicycle counter data with weather data. I used NOAA Quality Controlled Local Climatological Data from Boeing Field, to record temperature and precipitation corresponding to the observed times in the bicycle data. Being from Boeing Field, the weather data probably aren’t a perfect match for Fremont, but for the purposes of this exploration should be plenty similar. (The website at seattle.gov has more detailed weather data from the University of Washington plugged into a Tableau interface. I had QCLCD data readily available, so that’s what I used. The UW weather recorded more elaborate measurements, like Solar Watts/m2 and wind speed, but I assume that season, temperature, and rain encapsulate most of the variability explained by the more nuanced weather information. If somebody was paying me for this I would spend the time to secure the more detailed data.) 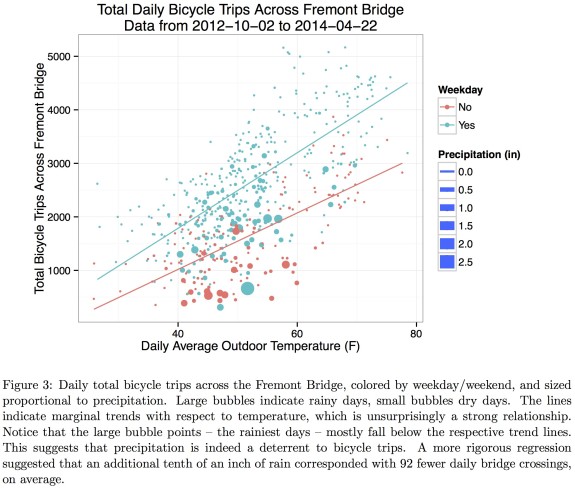 To investigate the effect of weather, we can first view the somewhat complicated in appearance Figure 3. This graphic shows daily total bicycle trips as a function of daily average temperature, with the points sized according to daily precipitation. The data were separated according to weekend and weekday, with overlaid trend lines with respect to temperature. Most obvious is the strong trend of ridership with respect to temperature, a no-brainer. Notice also that the largest bubbles, which denote the rainiest days, almost all occur beneath the respective trend lines. That suggests, in at least an exploratory fashion, that rain indeed deters bicycle trips, even when adjusting for temperature1. The rainy days nearly all fall below the counts suggested by temperature alone.

But we’d like to make it official. One obvious way of estimating the effect of rain on bicycle trips is to fit a regression model. It was already clear from Figure 3 (and common sense) that temperature strongly correlates with volume of bicycle trips. However, daylight and seasonality also surely play a role. I know that I personally take fewer bicycle trips in the dark, regardless of weather. Similarly, potential riders may also experience a wintertime mental block, where bicycling to work on a nice day in February never even occurs to them, because it’s February. As such, I fit a regression model to the daily total ridership as a function of daily average temperature, daily total precipitation, and a sine wave to encompass seasonality and daylight (again, with the more detailed UW weather data I could have also considered incident solar and wind speed, but I assume that the terms I included account for most of the variability explained by weather).

Let Yi denote the number of bicycle crossings for a particular day i. Similarly, let tempi denote the average temperature, precipi denote the total precipitation, and datei denote the date, scaled by 2π/365 to convert to a sine wave with period one year. The form of the regression model was as follows:

Fitting this model, which is to say adjusting for season and temperature, one additional tenth of an inch of rain was associated with 92 fewer bicycle crossings per day, with 95% confidence interval (68, 115). We may safely assert that Seattleites do indeed hang up the bike shoes and messenger bags when the rain starts falling.

In the next part, we will look at the effect Bike Month has on ridership levels.

1In Seattle, precipitation is confounded by season. A plot of bridge crossings against precipitation will surely show declining ridership on wet days, but we wish to disentangle whether that decline is related to the rain itself, or the fact that the rain typically falls during colder, darker winter months.

22 Responses to A statistical analysis of biking on the Fremont Bridge, Part 2: Rain