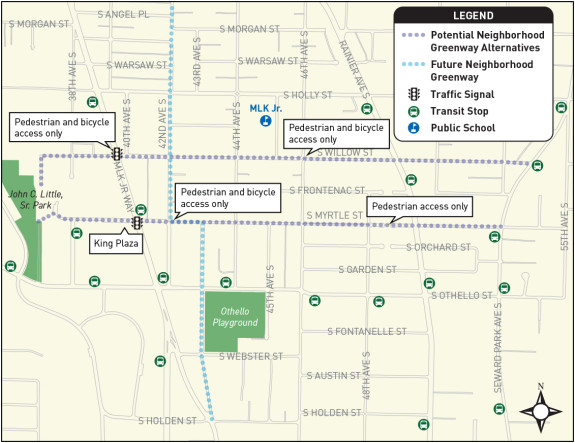 The city is planning two neighborhood greenways in Rainier Valley this year with hopes to have them ready to build next year. One route will travel north and south for much of the valley, and the other will travel east-to-west in the Othello neighborhood.

A community open house Monday will look at options for that east-west route, which will essentially connect the Seattle Housing Authority’s NewHolly neighborhood and the Chief Sealth Trail to Seward Park Avenue. Though relatively short, it will connect to destination on MLK and Rainier as well as the proposed north-south greenway. It will also connect to 42nd Ave S, a good low-traffic connection to the Othello light rail station.

The open house will go from 6 – 7:30 p.m. Monday at the Emerald City Bible Fellowship Auditorium at Rainier and S Chicago St. The presentation starts at 6:30.

The two route options are on Myrtle and Willow Streets. Notably, the city’s map shows they are considering traffic diverters along the route. Without diverting traffic off neighborhood greenways, traffic levels can be too high for truly comfortable all ages and abilities use. Diverters do not close the streets to cars, but sometimes people will need to circle the block to get to their driveways. But that’s a small price to pay for a street safe enough for kids to play without worry.

The city conducted a safe streets upgrade on Othello Street in 2012 that was primarily aimed at people walking. That street, just a couple block south of the proposed greenway routes, now has some paint-only bike lanes. However, the lanes disappear at major street crossings and are not anywhere close to being comfortable for all riders.

More details on the open house, from Rainier Valley Greenways:

Join the Seattle Department of Transportation (SDOT) on Monday, June 2 to talk about a neighborhood greenway in Rainier Valley. SDOT is studying an east-west route in the area of S Myrtle and S Willow streets from John C. Little, Sr. Park to Seward Park Avenue S. We want to hear from the people who live, work, shop and play along these streets.

This is the first of two public meetings. The first meeting shares traffic data and helps SDOT staff understand where people want to walk and bike and barriers to doing so. At the second meeting we share the results of technical analysis and public comment and the most promising route with recommended safety improvements.

If you can’t make the meeting, let us know what improvements you’d like to see along S Willow or S Myrtle that would enhance your experience walking or biking?
http://www.gorvgreenways.com/topics/15343/rainier-valley-s-first-neighborhood-greenway

Where do you live, work, shop or play along S. Willow or S. Myrtle?
http://www.gorvgreenways.com/topics/15344/destinations-along-s-willow-and-s-myrtle

7 Responses to Rainier Valley is getting an east-west neighborhood greenway, open house Monday