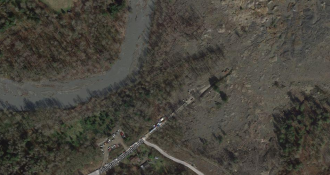 The Whitehorse Trail ran just north of the road and was wiped out in the landslide. Image from Google.

The Oso landslide devastated a community, took many lives and destroyed many homes. Some of what was lost can we rebuilt and recovered, but a lot cannot.

FEMA has stepped in to help with much of the cost of recovering from the disaster. Snohomish County announced earlier this month that restoring the Whitehorse Trail is one of many projects that will receive federal assistance.

The walking, biking and horseback riding trail runs along a former railroad line and connects Arlington and Darrington. Work could begin in late summer.

The Whitehorse Trail between Arlington and Darrington is one step closer to being repaired after the 530 slide thanks to recently announced FEMA funding. The added financial assistance allows Snohomish County to be reimbursed for work to restore public facilities and infrastructure.

“Partnering with WSDOT to reopen SR 530 is our first priority, but we’re anxious to start work on the Whitehorse Trail, too,” said Snohomish County Executive John Lovick. “We know how important the trail will be once it’s developed, and that the community is eager to see it restored.”

The March 22 slide covered roughly one mile of the trail near Oso. The county hopes to begin work later this summer to restore the trail. Engineers are in the very early stages of deciding how to remove the slide material and complete the restoration work.

“The funding that we can get for the Whitehorse Trail only covers 75 percent of the cost to bring the trail back to its original condition,” said Parks Director Tom Teigen. “We eventually want to improve it to the standard of a bike and horse trail, but at this point we just need to restore it.”

The Whitehorse Trail is a 462.7-acre, 27-mile-long corridor that stretches between Arlington and Darrington along the former Burlington Northern Railroad grade. It features several fishing access points and river bridge crossings. Find more information about the Whitehorse Trail on the Snohomish County website.