Bicycle Pull-Apart owner: ‘I have always followed the letter of the law’ 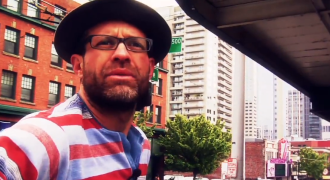 Eric Patchen didn’t build up credit, and he didn’t inherit a lot of money. So when he wanted to start a bike shop in Belltown, he did it without loans.

“I did it on my own,” Patchen said. “I put my heart and soul into this thing … I thought anyone who had a dream and a desire to own a business could be here.”

But as we reported yesterday, Patchen and his Belltown bike shop Bicycle Pull-Apart are now the subject of a police investigation linking the shop to more than $10,000 worth of stolen bikes. Police say they spent months investigating BPA and Patchen after receiving tips that the shop was trafficking stolen bikes, but Patchen says he has always followed laws governing resale and pawn shops.

He said police are under pressure to stem the bike theft “epidemic,” but arresting the actual thieves is a lot harder than arresting a shop owner.

“They [SPD] want to pin it on somebody who opens his doors every day and stands there and says, ‘Here I am,’ said Patchen. “I’m an easy target.”

Patchen was arrested March 13 and was released on his own recognizance. At a hearing a few days later, he was told that no charges would be filed immediately, but that he could still be charged at a later date. He went back to work and continued running his shop. Last week, police served a warrant and recovered three stolen bikes from the shop floor. Police outlined their investigation Monday on the SPD Blotter. The investigation is ongoing, and the shop remains open for business.

BPA does not carry a selection of brand new bikes like many other shops. Instead, the shop operates as a second-hand shop, purchasing bikes and bike parts, fixing them up, and reselling them out of their shop. Patchen said he believes strongly in recycling bikes and providing a low-cost option for low-income downtown residents to get some wheels.

He said he will work with people who do not have enough money to buy a bike to find a work-trade deal. His shop has also donated bikes and parts to various organizations, including Bike Works, New Horizons Ministries and Orion Center, he said.

But while Patchen says he is fixing up bikes that come into his shop (a legitimate and even socially beneficial business model), detectives claim he is purposefully switching out parts so they are harder to recognize as stolen. This “chop shop” model is common in bike theft rings.

Patchen owned some pedicabs before starting BPA and was even featured in a 2010 episode of Seattle Channel’s CityStream (watch the episode below). After trying for a while to buy, fix and sell bikes on Craigslist, he became frustrated with the inconsistent Craigslist market. People would be no-shows or he would have to travel far from Seattle to make a sale.

“I thought I would turn the tables and start a business where people bring bikes to me,” he said. So he started the shop in Belltown. “I tell people, ‘I’m Craigslist with a conscience.’”

Downtown has long been a bike theft hot spot. So being a shop in downtown that buys bikes means BPA gets a huge number of potentially stolen bikes coming through its doors. Seattle Police say “more than half of the bikes bought by the shop between February 2013 and January 2014 were bought from convicted felons, many of whom have records for burglary and theft.”

When police served a warrant and searched the shop April 9, they found three bikes that had been reported stolen. The total value of the bikes adds up to $9,000. Police are working to find the rightful owners, according to the SPD Blotter.

In a probable cause document filed when Patchen was arrested in March, detectives outline what they say is a bike theft system in which Patchen would purchase bikes from a middle man who Patchen trusted. The investigation was based in part on leads from informants and low-level bike thieves.

Patchen said he follows all the proper procedures, registering all the bikes into the Leadsonline computer database system for tracking property sold to pawn shops. He even runs the serial numbers through stolenbicycleregistry.com.

He walked me through the process he says he follows: 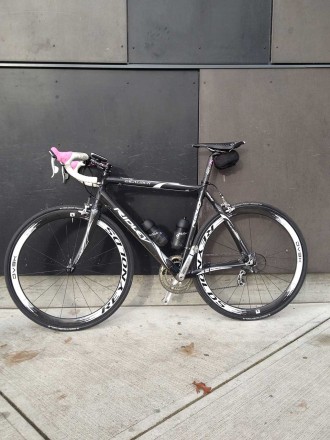 This stolen bike, worth about $3,500, formed a large part of the BPA investigation. Image from the stolenbicycleregistry.com listing

Part of the police investigation involves “suspiciously mistyped serial numbers entered in the online system.” In the probable cause document, the detective goes as far as saying, “upon seeing the imprinted serial number, I can only conclude it was intentionally mistyped as the number was clear.”

But Patchen said he has no desire to aid in bike theft and, in fact, has helped people recover at least 40 bikes since he opened his shop.

“My mistake was to not run it, because it was from a friend,” Patchen said. He said he is no longer friends with the person who sold him the frame and fork.

But as for the larger problem of bike theft, he blames the police process that fails to link reported thefts with items registered by resale shops. He said that if he enters a bike into the system and it later gets reported as stolen, then the police should have access to that information and be able to make that connection.

“Beyond that, I’d have to go find the criminal for them, then go find the owner and return the bike to them,” said Patchen. “I’m not a super hero.”

Here’s a 2010 CityStream segment on Patchen, where he takes the crew around downtown on a pedicab tour:

64 Responses to Bicycle Pull-Apart owner: ‘I have always followed the letter of the law’