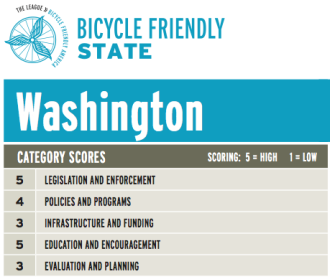 Washington has been the #1 bicycle-friendly state for six years, despite poor scores for “infrastructure and funding”

On March 13, the Washington State Legislature adjourned with the passage of an 11th-hour supplemental spending plan. The supplemental budget maintains the status quo for statewide bicycle and pedestrian funding for the remainder of this biennium. But, thanks in large part to the failed passage of a transportation revenue package, a potential significant drop in future funding looms on the horizon.

Coupled with the expiration of federal funding from MAP 21 (Moving Ahead for Progress in the 21st Century) in October of this year, the funding reduction could have serious implications for future bike and pedestrian projects in the state.

The 2013-2015 biennial budget provides a little over $30 million for biking and walking, a mix of state and federal funding that’s used for everything from new sidewalks in Ellensburg to ADA improvements on the Centennial Trail in Snohomish to Safe Routes to School programing. The 2015-2017 budget as currently projected will provide just $8 million in funding for biking and walking.

The proposed transportation revenue package would have helped bolster funding past the current biennium. It’s difficult to say by how much exactly, since the Senate never passed a final package. But the Senate Majority Caucus Coalition (MCC) proposed a $12.4 billion package funded primarily by an 11.5-cent gas tax increase. As of the end of February, their proposed package would have provided $62 million for bikes and pedestrian projects and $50 million for Safe Routes to School through 2026. The House passed its own $10.3 billion revenue package last summer that devoted just .5 percent of the funding to bike and walking (and early discussions included an ostensibly-symbolic bike tax, which was dropped).

“The projected drop in state grant program funding will stall momentum statewide for creating safer streets and trail connections, especially where our children walk and bike,” said Blake Trask, Policy Director with Washington Bikes. (Full disclosure: Trask is a friend of mine).

The end of the legislative session leaves few options for increasing statewide bicycle and pedestrian funding this year. Bike advocates are instead looking to the April 22 King County special election as the critical next step in the fight for more funding.

“Passing the King County Transit and Roads package (Proposition 1) on April 22 is essential for our long-term funding needs for those that walk and bike,” said Trask. “If Metro Transit’s funding is stabilized, it gives King County legislators more latitude to advocate for biking and walking connections, safe routes to school and complete streets projects that can revitalize main streets statewide, should a transportation revenue package come up for debate again.”

Prop 1 would fund King County Metro with a 0.1 percent sales tax and a $60 vehicle license fee. If passed, 60 percent of the funding raised by Prop 1 would go towards preserving current Metro Transit service levels. The remaining 40 percent would be used for transportation and road improvements in King County cities and unincorporated areas. As written, Prop 1 allows the possibility for some of that remaining funding to be spent on bike and pedestrian improvements.

If current funding levels are maintained, Trask said he’s concerned Washington could slip from the top spot in the League of American Bicyclists’ Bicycle Friendly State rankings as other states increase their investments in biking and walking.

“Even if we maintain current investments, other states are beginning to pass Washington State,” he said. “They are starting to outspend Washington as they see the clear economic and safety benefits that walking and biking investments provide.”

Washington has been ranked first for the past six years. The state gets very high scores for legislation, policies and education programs, but gets low scores for “infrastructure and funding.” The bar for bike-friendly states is low enough that Washington has so far held onto its top spot despite funding issues, but competition around the nation is growing.

Last month, the Massachusetts Legislature voted to maintain $50 million in Safe Routes to School funding and to make a five-year, $377 million investment in bike and pedestrian infrastructure. Colorado Governor John Hickenlooper declared that he is not content with his state being second on the list and will work to unseat Washington. And though not an apples-to-apples comparison, San Diego County is investing $200 million over 10 years in regional biking and walking trails.

Josh Cohen is a freelance journalist and editor of The Bicycle Story.
View all posts by Josh Cohen →
This entry was posted in news and tagged 2014 legislature, blake trask, josh cohen, washington bikes, wsdot. Bookmark the permalink.