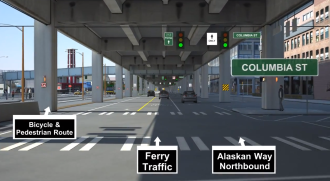 A WSDOT visualization of the temporary Alaskan Way reroute, looking north at Columbia

A man was seriously injured Tuesday night while biking on Alaskan Way.

Details are sparse, but it sounds like the man was biking northbound on the biking and walking path near Columbia Street when he collided with a southbound SUV.

There is a traffic signal at the intersection, but police do not note who had the right of way at the time of the collision, which happened just south of Columbia.

It is also not clear if ongoing construction related to the Alaskan Way Viaduct removal project was a factor. Traffic is currently routed onto a temporary street below the viaduct.

We wish him a full and speedy recovery.

A bicyclist sustained serious injuries following a collision with a SUV. On April 1, 2014, at approximately 10:30 p.m., a white 2003 GMC Envoy was traveling southbound on Alaskan WY just south of Columbia St. At the same time, a bicyclist was traveling northbound on the east side bike/pedestrian path on Alaskan WY approaching Columbia St parallel to the roadway when for unknown reasons the cyclist left the pathway and collided with the vehicle in the southbound lane of the roadway.

Seattle Fire responded and treated the adult male cyclist; he was transported to Harborview Medical Center via Medics with what was thought to be head trauma.

As is routine, a Drug Recognition Expert (DRE) unit responded and evaluated the driver of the vehicle; it was determined that the driver was not impaired. The driver was released at the scene, pending further investigation.

Founder and Editor of Seattle Bike Blog.
View all posts by Tom Fucoloro →
This entry was posted in news and tagged alaskan way, injuries, spd. Bookmark the permalink.

12 Responses to Person seriously injured in collision on Alaskan Way