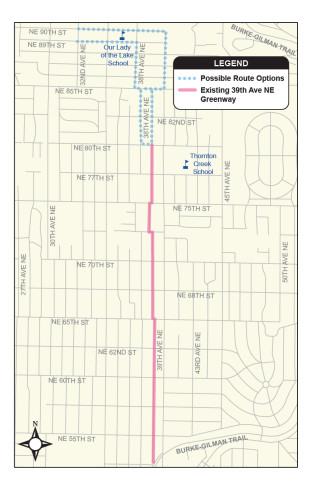 By most measures, the 39th Ave NE project was the city’s first truly successful experiment with neighborhood greenways. Funded by Seattle Children’s and developed through the hard work of NE Seattle Greenways, the project was the first to include stop signs for cross streets and included a fantastic new connection to the Burke-Gilman Trail.

The route is not perfect, but it’s pretty close. It has also helped to highlight the need for speed humps to slow cars and better arterial crossings at future neighborhood greenways.

The route is well used by people of all ages and abilities, and the city is already planning a short extension of the route north to NE 90th Street near Our Lady of the Lake School. From there, the route will turn and head west, including an improved crossing of the busy and poorly-designed 35th Ave NE.

If all goes according to schedule, construction could begin this fall.

You can learn more about the plans and give your feedback at an open house tonight (Thursday), 6:30–8 p.m. at Thornton Creek School Cafeteria. The presentation starts at 7.

In 2013, SDOT and Seattle Children’s Hospital completed a neighborhood greenway along 39th Avenue NE between the Burke-Gilman Trail and NE 80th Street. If you have not used it, we encourage you to check it out.

This year we’re looking at extending a north-south route in the area of 38th and 39th avenues NE from NE 80th to 89th, or 90th streets and over to 32nd Avenue NE. We want to hear from the people who live, work, shop and play along these streets. We’ll be holding two public meetings. The first meeting shares traffic data and helps SDOT staff understand where people want to walk and bike and barriers to doing so. At the second meeting we share the results of technical analysis and public comment and the most promising route with recommended safety improvements.