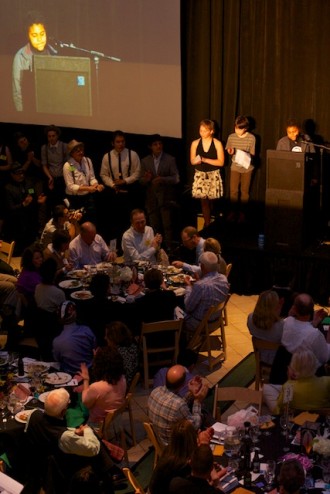 From its humble beginnings in a yellow house on Ferdinand Street in Columbia City, Bike Works continues to grow at an amazing pace. Their expanded reach is easy to see as both their programs and their annual auctions outgrow their former spaces.

Their auction, held Sunday, outgrew its previous venue and expanded into the Seattle Design Center in Georgetown. Always a good time, I volunteered for the third year in a row. I definitely recommend either attending or volunteering next year if you have never done so before.

The hottest item of the evening was, of course, the Rodriguez bike decked out in a Seahawks theme that Mayor Ed Murray put on the line against Denver Mayor Michael Hancock in a Super Bowl bet. It sold for $5,100.

They money raised at the auction will continue to fuel the organization’s steady growth. In the past few years, Bike Works has expanded into a larger warehouse and classroom space near the iconic yellow house where it started (the yellow house is now mostly used by the shop, which also helps raise money for Bike Works programs). With the space expansion, Bike Works has doubled its youth programs, Salls told the auction crowd.

At the same time, their influence on the neighborhood and the national bike scene grows, too. With their participation in Rainier Valley Greenways, Bike Works is helping residents organize and establish a clear voice in the call for safer streets in a neighborhood with some of the city’s most dangerous roads. After all, if Bike Works participants are going to put in the work to empower themselves through bicycling, the least the city can do is make sure the streets are safe for them to do so. 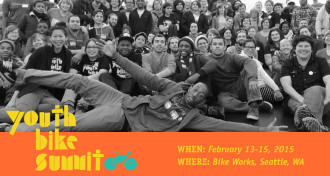 Bike Works’ continued expansion has also attracted national attention, and Executive Director Deb Salls announced at the auction that Bike Works will host the 2015 Youth Bike Summit. This will be the first time the summit will be hosted on the West Coast, and will bring groups from all over the nation to Seattle to share ideas and learn from Bike Works.

“This is the first year we are moving the summit outside of New York City, and we are so glad to be able to bring the Summit to the west coast and to the increasingly bike-able city of Seattle,” said Salls.

“The 2014 summit was attended by 484 individuals from 26 different states and four countries. We had dynamic workshops, keynote speakers and makerspaces —  many of which were led and planned by youth.”

One offshoot of the Youth Bike Summit energy is a series of bike ride weeks this year.

“Groups across the country will be sending in the miles they ride, and we are going to calculate the number of calories burned and other aspects of collective impact as we work together nationally toward the same goals even while we are back home in our local communities,” said Salls. The efforts will be rolling May 10–17 and August 9–16.

While there is a national steering committee that helps guide planning for the 2015 summit, planners are also looking to put together a local committee this year.

“We are looking for groups who want to collaborate on this project,” said Salls. Interested people and groups should get in touch with her by emailing [email protected].

Much of the 2014 summit was streamed live and archived online for organizations and youth who could not attend, and Salls said they will be trying to expand on these efforts to allow more people participate via technology. So if you have some expertise or equipment to lend them, definitely get in touch.

By the way, if you love Bike Works and are looking for work, this could be your chance to join the team. They have three job openings right now.