After losing too many bikes, hackathon coder creates map of stolen bikes 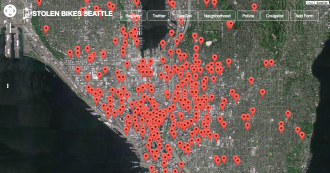 Here’s an example of someone channeling their anger at bike thieves into something valuable. Local coder Chip attended a recent Code for Seattle hackathon and used his experience losing bikes to thieves to inspire a project: An interactive map of bike theft locations.

The map is not fully functional as is, but it’s a good proof of concept.

Upon arriving breakfast was served. After grabbing coffee and donuts and mingled for a little, we headed to the main room for Open Data Talks. It opened my eyes that there has been great progress — organizations and individuals are working to make the government’s data more transparent. When Neil whom represents The City of Seattle was giving his talk about metadata at https://data.seattle.gov, the word “stolen bicycle” suddenly flashed in my mind. I had this idea of working on the website about raising awareness about bike thieves after my bicycle get stolen for the third time.

Founder and Editor of Seattle Bike Blog.
View all posts by Tom Fucoloro →
This entry was posted in news and tagged bike thefts, code for seattle. Bookmark the permalink.

5 Responses to After losing too many bikes, hackathon coder creates map of stolen bikes