Some Seattle bike routes have healthier air than others 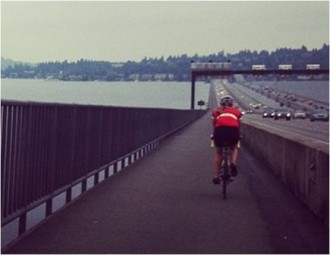 The health benefits of cycling might not depend solely on how often you bike, but also on where you bike.

Biking is good for your health, right? You’ve probably heard it from bike advocates, the Seattle Bicycle Master Plan, the CDC and maybe even your doctor: Bicycling for transportation in Seattle is a healthy choice.

But when University of Washington Prof. Christine Bae had a past graduate student — Andy Hong — travel a loop around the center of the city using a device to measure commute-time pollution exposure, they found air quality can vary dramatically at points along popular bike routes. Biking on NE 45th Street in the U District will expose you to far higher levels of black carbon than biking on the Burke-Gilman Trail, for example.

So the health benefits of cycling might not depend solely on how often you bike, but also on where you bike.

Urban planners have assumed interventions like walkable transit-oriented development and bike networks hold positive health outcomes for communities, but a ten-year study from the MIT Center for Advanced Urbanism shed a ‘not so fast’ warning on the above assumptions, according to The Atlantic Cities.

The article concludes, “a recurring thread throughout the [MIT] report is one of humility: We don’t know as much as we think we do, and there are certainly no silver-bullet design solutions for systemic public health problems.”[1]

As a bike commuter, I simultaneously cough in downtown rush hour traffic and assure myself the physical activity benefits of bicycling far outweigh any harm from pollution exposure. But that’s not just my invincible-twenty-something reaction. Even the 2008 Physical Activity Guidelines for Americans remain ambiguous and almost contradictory on the topic:

“Exposure to air pollution is associated with several adverse health outcomes, including asthma attacks and abnormal heart rhythms. People who can modify the location or time of exercise may wish to reduce these risks by exercising away from heavy traffic and industrial sites, especially during rush hour or times when pollution is known to be high. However, current evidence indicates that the benefits of being active, even in polluted air, outweigh the risk of being inactive.”[2] (Chapter 6: Safe and Active, emphasis added)

Despite this claim — one that isn’t necessarily evidence-based — the research behind the risk tradeoff between physical activity and air pollution exposure is inconclusive, and it doesn’t always fall in the favor of the bicyclist.

So can Seattle bicyclists breathe easy? That may depend on where in the city you bike.

The Transportation Research Board study I introduced above, Exposure of Bicyclists to Air Pollution in Seattle, Washington,[3] measured bicyclists’ air pollution exposure on Seattle streets, specifically looking at black carbon concentrations, a carcinogenic diesel byproduct. Between June and September of 2010, the researchers used a mobile monitoring device on a bicyclist to measure black carbon exposure during peak morning and evening commute hours. The 12-mile route in the study covered the Fremont bridge, the Burke-Gilman Trail, the University District, Lakeview Boulevard adjacent to I-5, the downtown core, Elliott Bay and Interbay, reflecting a mix of traffic volumes, bike facility types and land uses. The route is reproduced in Figure 1 below. 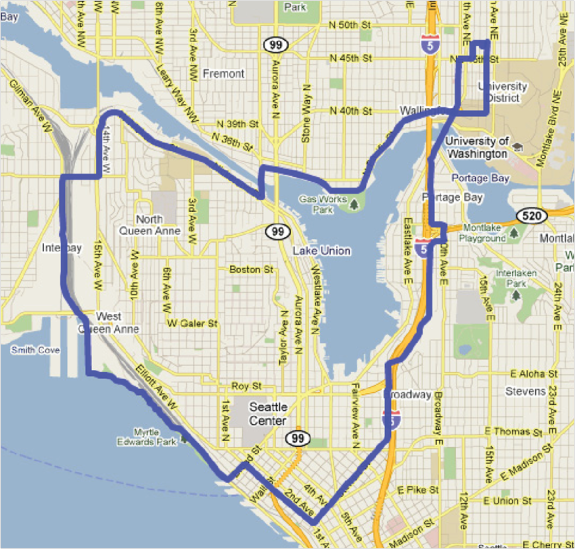 Areas of high traffic congestion, especially those requiring frequent stops, topped the list for the worst exposure. These “hot spots” include intersections on both sides of the Fremont bridge and N 45th Street through the University District. In fact, these areas experienced higher concentrations of black carbon compared to Lakeview Boulevard adjacent to I-5, where vertical separation from the freeway mitigates adverse exposure.

Exposure also peaked around Broad Street near Seattle Center, likely from frequent freight traffic, and in Interbay from idling trains and industrial land uses. These peaks are visible in the 3-D pollution map reproduced in Figure 2 below. 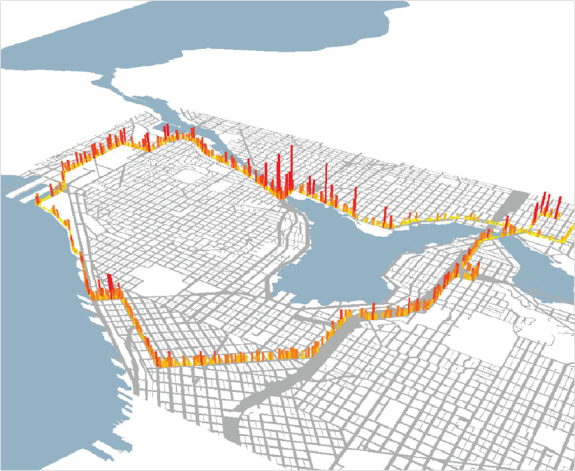 Contrary to other research on the topic, traffic volumes didn’t always predict pollution exposure. Traveling on a bike path did. When compared to on-street riding, bike paths, including the Burke-Gilman Trail and the Elliott Bay Trail, proved to be the best predictor of lower black carbon concentrations. However, black carbon exposure did peak on the section of the Elliott Bay Trail that runs through the Interbay train yard.

What do we know? Traffic emissions are harmful to your health. Air pollution causes coughing, wheezing, heart rate variability and lung inflammation; and in the long-term it increases a person’s risk of lung cancer, stroke, heart attack, asthma and birth defects (among other complications). But living a physically active lifestyle is beneficial to your health. Regular physical activity reduces your risk of chronic disease and dying prematurely.

We also know exposure varies based on the concentration of pollutants, the duration of exposure and one’s ventilation rate; which more than doubles during exercise, making people traveling on bikes particularly vulnerable.

How do we minimize the risk tradeoff? For one, better infrastructure. According to a Canadian study linking bicycling in traffic to heart health risk, a bicyclist’s proximity to tailpipes is a primary factor in heightened pollution exposure. Separating people on bikes from car traffic through protected bike lanes and bike boxes at intersections not only increases safety, but significantly reduces exposure to traffic emissions. In Portland, researchers found a  protected bike lane physically separated from traffic by a row of parked cars experienced significantly lower concentrations of ultra-fine particulate matter compared to a traditional bike lane.[4]

We can also equip riders with the tools they need to make informed decisions about their health. For example, CycleVancouver’s route planner offers a “Least Traffic Pollution” preference setting when mapping a route.

As bicycling moves to be more inclusive, we can’t ignore that elderly populations and children are more sensitive to health complications from air pollution exposure. Environmental justice research, including research in urban King County, has shown that low-income, minority neighborhoods are often the most adversely affected by air pollution.

Of the world’s 19 top risk factors for mortality, physical inactivity ranks as the fourth highest,[5] while urban outdoor air pollution trails down at fourteenth. As an individual commuter, I like those odds. But it’s something to consider when choosing your route or planning for a bike-friendly city: Will the breathing be easy?

[1] Badger, E. (2013, December 17). We Don’t Know Nearly As Much About the Link Between Public Health and Urban Planning As We Think We Do. The Atlantic Cities. Retrieved January 21, 2014, from http://www.theatlanticcities.com/neighborhoods/2013/12/much-what-we-know-about-public-health-and-urban-planning-wrong/7886/

[5] WHO. (2009). Global Health Risks: Mortality and the burden of disease attributed to selected major risks. Retrieved February 8, 2014 from http://www.who.int/healthinfo/global_burden_disease/GlobalHealthRisks_report_full.pdf

Ryann grew up mountain biking Bend, Oregon. She became an avid bike commuter after moving to Seattle in 2012 for an AmeriCorps position at Cascade Bicycle Club. Currently working in environmental consulting in Seattle, Ryann now only nerds out on bike infrastructure in her spare time. She remains passionate about the connection between community design, sustainability and health. Follow her on Twitter: @RyannChild
View all posts by Ryann Child →
This entry was posted in news and tagged air quality, andy hong, christine bae. Bookmark the permalink.