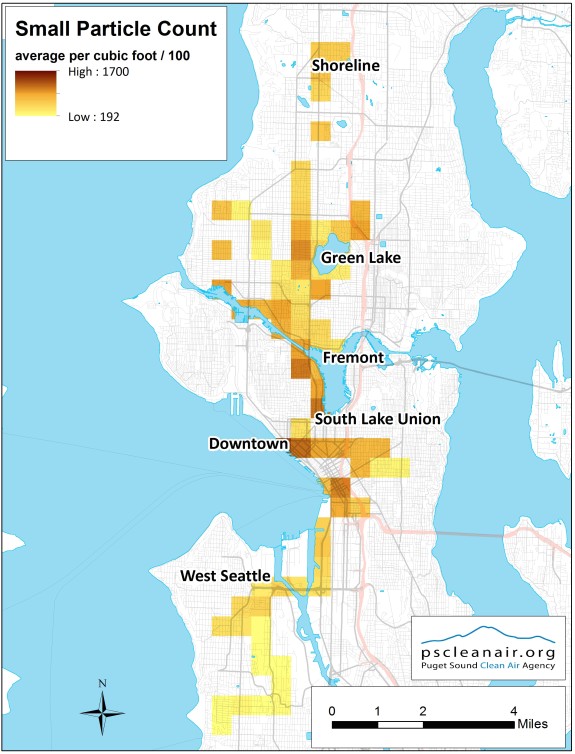 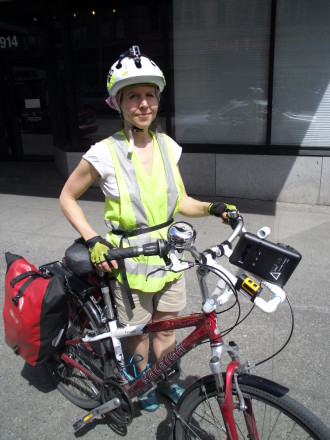 Heather McAuliffe with her pollution-sniffing instruments mounted on her bike. Photo from McAuliffe.

The Puget Sound Clean Air Agency has been experimenting with a new way to gather a more complete picture of Seattle’s air quality conditions: Attaching measuring instruments to their bicycles.

In a February report for Seattle Bike Blog by Ryann Child, we told you about a UW study where researchers biked a black carbon measuring device in a loop around the city. The results were somewhat stunning because it showed big spikes in pollution levels in sometimes surprising locations. And it raised more questions than it answered. Specifically: What about the rest of the city?

Heather McAuliffe is a Fremont resident who rides a bike to get around and is passionate about air quality issues.

“I grew up here, and when I took my first airplane trip when I was seven I remember flying in and out of Seattle and I could see the pollution,” she said. “People’s health depends on clean air.”

So McAuliffe researched and purchased a particle monitor, GPS and GoPro camera set up, and the Puget Sound Clean Air Agency offered to analyze her data. McAuliffe works for Seattle’s Departments of Neighborhoods, but took on these efforts in her free time. Several PSCAA employees also bought the bike-mountable air quality devices and used them to collect data during May’s Bike Month.

The PSCAA has “robust” air quality information from some stationary devices and industry data sources, but they do not have anything the gets granular down to the block-by-block level.

“As the science has been growing and evolving, there continues to be new tech and new instruments that let us see more,” said PSCAA Air Resources Specialist Phil Swartzendruber. So while they have good data on a handful of fixed locations around the region, “What happens on each block and each neighborhood where people walk and people bike and people kayak?”

And, importantly, the instruments are getting cheaper and more portable. The particle measuring instrument they used costs about $400. “In terms of a scientific tool, that’s quite cheap,” he said.

A more accurate instrument could cost in the $20,000 range and would be harder to transport. But the bike-mounted experiment represents a somewhat crude snapshot of some air particles known to be harmful to people’s health.

The results of the experiment and the cost of the instruments has the agency considering what a bigger and more complete data gathering process could be possible in the future.

“Is this something we could loan out to people?” asked Swartzendruber, suggesting that the agency could some day give people the chance to effectively check out the measuring devices to collect data where they live and work and return it to the PSCAA for analysis.

But don’t hop on your bike and head down to the PSCAA offices just yet, as they do not have the plans or infrastructure to engage the public like this yet. But if you are super interested in the idea, you can contact spokesperson Kit McGurn to chat about how or whether you can help.

What they have found so far

The biggest thing they have learned from this experiment is that this does seem to be a good way to gather data. But there is some useful data for people who bike (or walk or, you know, breathe).

First, the big intersection of Dexter, Westlake, Nickerson and the Fremont Bridge really does stand out as a problem area. This was also noted in the UW study, so it seems that area does have significantly worse air quality than most other areas of the city measured so far.

I asked why this might be, and Swartzendruber could only speculate that it has to do with so many busy streets converging and the fact that the area has a lot of idling vehicle engines, which are known to produce a lot of harmful pollution. In fact, the worst vehicle pollution is often emitted as the vehicle starts up from a stop.

Another area where you are likely to encounter larger-than-normal pollution levels: Downtown.

“In downtown, levels almost always went up,” said Swartzendruber. Again, this is likely due to lots of traffic and lots of idling vehicles.

But lest you see this data and get worried about so much red in the map, researchers cautioned people not to read too much into the map’s color coding.

“We didn’t witness anything that was really concerning in the first place,” said Swartzendruber. They also said it’s a little difficult to say exactly what these somewhat crude measurements are saying about the air quality’s effect on health. There are many sizes of fine particles in the air, for example, and the instruments only measure some of them. And the color scale chosen is just to show changes in the dataset. So it’s not like “red” means you’ll experience Beijing or even Los Angeles levels of pollution. But it does show that some kinds of pollution are higher than in other areas.

And though people on bikes are sometimes exposed to higher-than-normal levels of pollution, the benefits of biking still outweigh the negatives from pollution according to the PSCAA website:

Preliminary data from Seattle and other cities suggests bike riders may have short-term exposures to higher levels of pollutants in the city. The best current scientific evidence, however, suggests that the benefits of riding greatly outweigh the much smaller risk of short-term pollution exposure.

McAuliffe hopes the data collection leads to a bigger conversation about the effect of air quality and vehicle pollution on people’s health.

“I want the city to take more seriously the consequences of mixing people near heavy traffic,” she said. And having more data may help us do that.

How does the air quality for some kids’ walk or bike routes to school compare to others? How is the air quality on the school playground? How about the park? How about the neighborhood’s commercial street? How does income or race correlate with a person’s exposure to pollution? What kinds of bike routes and bike facilities have better or worse pollution exposure? Does road design have an impact on pollution levels measured on the sidewalk?

There are a lot of questions left to answer, so I hope PSCAA does pursue this effort to expand our city’s air quality map to the block-by-block level.

If you are eager to start taking measurements yourself and have some cash to invest in the effort, here’s a list of the devices they are using:

In other bikey air quality news, a Portland researcher recently found that people biking 11 mph are exposed to less dangerous pollution that people going other speeds, especially if they are not on busy streets.