SPD: Man attacked for biking on the sidewalk (which is legal) 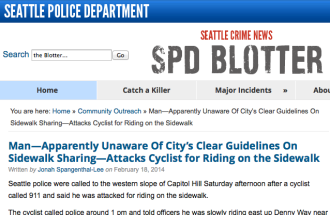 Seattle police were called to the western slope of Capitol Hill Saturday afternoon after a cyclist called 911 and said he was attacked for riding on the sidewalk.

The cyclist called police around 1 pm and told officers he was slowly riding east up Denny Way near Summit Ave when he passed a man on the sidewalk.

The man, who was carrying a full can of soda in his hand, took a swing at the cyclist, striking him in the neck and knocking him off his bike.

The suspect then told the victim ”this is what you get for riding on the sidewalk.”

The victim—who was not seriously injured—collected himself and walked up the hill away from the suspect, who continued screaming obscenities at the cyclist.

After returning home, the cyclist called police to report the incident. Officers searched the neighborhood, but weren’t able to find the suspect.

Now we’d like to remind all of you that, yes, cyclists (including SPD and King County Sheriff’s Office bike patrol officers) are able to lawfully ride on sidewalks, as long as they pedal carefully and yield the right-of-way to pedestrians. From the Seattle Municipal Code:

We hope this paves the way for a better understanding for pedestrians and cyclists of our city’s regulations on sidewalk use.

Of course, violent strangers travel by all modes or transportation.

Founder and Editor of Seattle Bike Blog.
View all posts by Tom Fucoloro →
This entry was posted in news and tagged crime, spd. Bookmark the permalink.

16 Responses to SPD: Man attacked for biking on the sidewalk (which is legal)