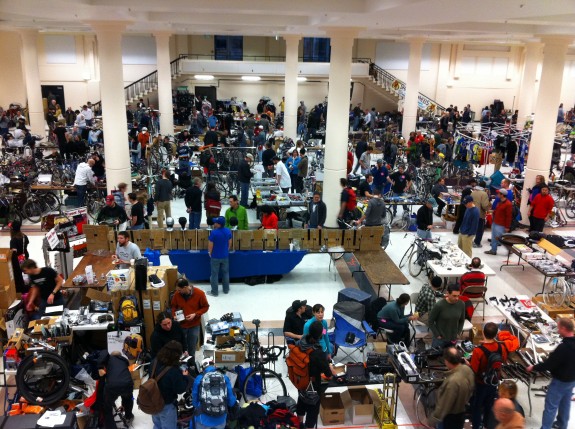 Cascade Bicycle Club’s annual Seattle Bike Swap is Sunday, a great chance to snag some deals. You can also sell a ride on consignment and support the club’s Major Taylor Project at the same time.

Held inside the Seattle Center Exhibition Hall (map), doors open to the general public at 9 a.m. It costs $5 to get in, and it would be a good idea to bring cash (there is an ATM if you forget).

If you’re in the market for a new set of wheels, or you’re looking for equipment or accessories, you don’t want to miss the Seattle Bike Swap. Now in its 17th year, Bike Swap is a bargain-hunters’ paradise, promising great deals on bikes and bike-related goods.With nearly 200 vendors under one roof, you’re sure to find everything you need to start your cycling season off right.

Arrive early because the really good stuff goes fast. And if you ride your bike to the event, remember to bring a lock. Racks are available, but they’ll be unattended.

…
Help out a great cause while earning some extra spending money at Swap! If you have a complete bike, the Major Taylor Project will sell it for you. For a $10 selling fee and 10% of the selling price, you can leave the the salesmanship to MTP while you hunt for two-wheeled treasures at Swap. Just drop your bike off between 8 and 8:30 a.m. and return for the moolah before 2 p.m.

1 Response to The 17th Annual Seattle Bike Swap is Sunday