I fixed a recent Seattle Times column about traffic fear 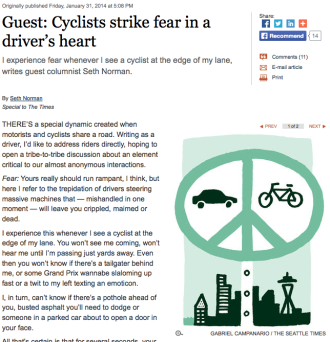 EDITOR’S NOTE: After reading Seth Norman’s guest column in the Seattle Times, I noticed that the piece needed a little editing work. Specifically, it seemed the author forgot to mention that we have a tried and true way to improve traffic safety: Investments in safer street design. I have heavily edited his piece, though not at the request of the Times or Norman. He said he wanted to start a discussion about fear on the streets, but I think the version below is a much better starting point for that conversation than was presented in the rough draft posted in the Times. Enjoy

Fear: Yours really should run rampant, I think, but here I refer to the trepidation of drivers steering massive machines that — mishandled in one moment — will leave you crippled, maimed or dead.

I experience this whenever I drive on a highway or busy street. I won’t see another car coming, and can’t hear most other cars at all even as they pass just feet away. Even then I can’t know if there’s a tailgater behind it, or some Grand Prix wannabe slaloming up fast or a jerk to my left texting an emoticon.

I can’t know if there’s a pothole ahead of me, busted asphalt I’ll need to dodge or someone crossing the street about to step out behind a parked car right into my car’s grill.

All that’s certain is that for several seconds, many people’s lives are in my hands.

And people are so fragile, slow antelopes pacing an elephant herd (though I suppose antelopes are actually must faster than elephants, but you get my point). You trust that I’m not oblivious, distracted, half-tanked or a full-blown sociopath eager for sport. Your faith bewilders me, frankly. While I don’t challenge your legal or moral rights to drive, bike or otherwise live city life, sometimes I wonder about your sanity. Well, our sanity, I suppose.

You’ve been safe from me, so far, but not always from others. 33,561 people in the US were killed in violent traffic deaths in 2012 alone. Inside cars, outside cars, on bikes, strolling on the sidewalk and even inside buildings, it sometimes seems that nowhere is safe from the destructive power of a motor vehicle. This is especially true in an urban environment.

I doubt many people reading this, if any at all, have lived in our society this long without a friend, family member or themselves being seriously injured or killed in a traffic collision. In fact, children and grandparents are injured and killed at a much higher rate than people in other age groups.

Here’s something I hope drivers consider: Fear frays my nerves. Yours too, I should think.

Breaking traffic laws is rampant in Washington. It seems like human nature to push the rules as far as you think they can go. Driving 9 mph over the limit because 10 would be excessive, rolling through stop signs on a bike, making a dash across the wide busy street even though there is no crosswalk. All technically unlawful and mildly risky moves. But, of course, only one of these unlawful moves is a contributing factor in the deaths of 10,000 people every year in the United States: Speeding in a car.

Why do we allow our roadways to be so dangerous? Why do we accept that our streets and highways should be built so people can comfortably drive 9 or 10 or 15 mph over the speed limit? When I, Seth Norman of Bellingham, drive to town, it’s on 6 miles of a two-lane road where there’s no bike lane, no paved shoulder and no passing allowed. I routinely cross the double yellow lines to give cyclists more room. While these are mildly risky moves — a little unsettling, technically unlawful — they’re such obvious precautions. I would never consider blowing on by a person on a bike.

But why did we ever build a road so unsafe that there’s not even space for our friends and neighbors to ride a bike without risking a close pass or worse? And why, now that we’ve identified the problem, don’t we take immediate action to make this road safer for everyone?

Some people are jerks on the road. Some of those jerks are on bikes, some of them are in cars, some are walking and, yes, some are on bus, too. But forgive me for grinding my molars when someone driving a car does something stupid and dangerous. When someone thinks they are in an armored elephant, safe behind air bags, likely hazarding only damage someone would pound out at a body shop. They risk, however, causing severe trauma to people on bikes, people on foot, people in other cars, themselves and even their daughter or father or best friend in the passenger seat next to them.

I also grind my molars when I see streets designed only with fast-moving cars in mind. These streets create dangerous and frustrating situations where two otherwise reasonable people can find themselves enraged at each other. A complete street has room for everyone to get around safely, and Washington has far too many incomplete streets like the one I take to town.

The threat of traffic violence fills me with something more wrenching than rage: fear.

Safe driving, please. But just as importantly, let’s invest in safe streets that make it harder for people to hurt each other while simply trying to get from one place to another.

Founder and Editor of Seattle Bike Blog.
View all posts by Tom Fucoloro →
This entry was posted in news and tagged seattle times, seth norman. Bookmark the permalink.