As work speeds up to get ready for the opening on UW light rail station at Husky Stadium, expect some significant and long-term Burke-Gilman Trail detours start in the area in coming weeks.

The biggest trail changes are part of the Montlake Triangle redesign. With the number of people walking and biking in this section of the trail set to skyrocket the day the light rail station opens (planned for early 2016), the redesign hopes to increase the capacity and safety of what might become the most heavily-used section of trail in the city (if it isn’t already). 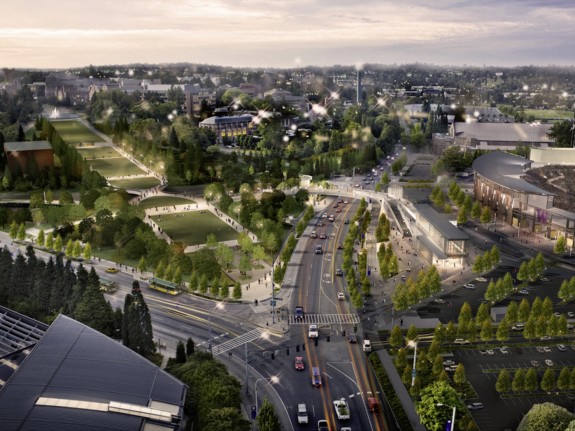 The biggest bike route benefits of the new design are a biking and walking bridge over Montlake Boulevard and grade-separation of part of the Burke-Gilman Trail through the area. By routing through-traffic on the trail underneath a new set of paths connecting UW campus to the new station, there should fewer people crossing the path of the trail. Though it’s hard to see in the fancy rendering above, here’s a top-down map of the plan: 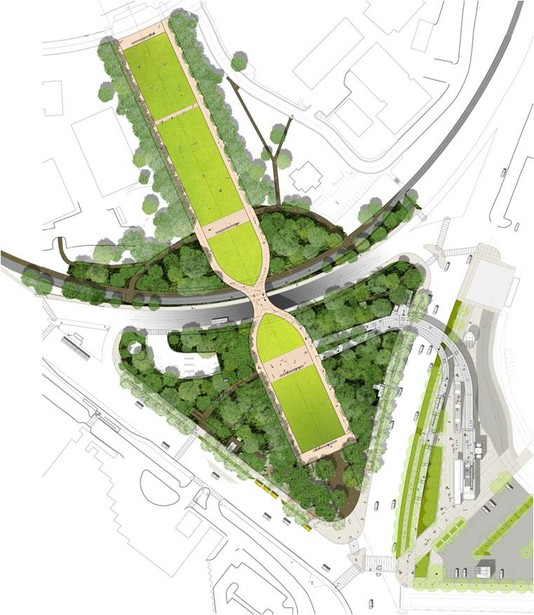 But in order to get the benefits of the changes, we’ll have to endure a tough detour for the next 18 months or so.

The Montlake Triangle Project (MTP) is breaking ground today. The MTP is a multi-agency effort consisting of three subprojects centered around the intersection of Pacific Street and Montlake Boulevard. The project scope includes lowering NE Pacific Place and constructing a land bridge that will connect the Montlake Triangle and the lower Rainier Vista, creating a seamless experience for people walking and bicycling. People traveling from the south will access the Triangle via a combination of existing crosswalks and a new bridge across Montlake Boulevard constructed by Sound Transit.

In order to accomplish the next phase of work, the Burke Gilman Trail will need to be rerouted. The Burke Gilman Trail detour will skirt around the lower Rainier Vista to get around the construction. The trail is expected to be closed and the detour opened the first week of February 2014. Construction is scheduled to be complete by August 2015 and the trail reopened to users.

Once the Burke Gilman Trail is detoured, work will continue with rerouting NE Pacific Place eastbound vehicular traffic onto the existing bridge currently used by the Trail. Southbound Montlake vehicle traffic going west will continue onto the southern tip of the Triangle and turn right onto NE Pacific Street.

Founder and Editor of Seattle Bike Blog.
View all posts by Tom Fucoloro →
This entry was posted in news and tagged burke-gilman trail, montlake triangle, uw. Bookmark the permalink.