Is there really a bike light arms race, or are we all just confused about what’s safe? 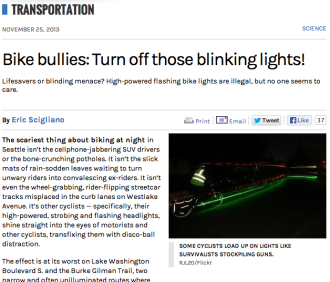 I absolutely love biking around Seattle at night. Our city is simply stunning, and a nighttime bike ride can turn a simple errand into an existential experience.

People who have biked through Interlaken Park alone at night probably know how easy it is to spook yourself out. Each rustle in the leaves or snapping twig sounds as loud as a bomb. Your reptile brain takes over and your senses go into high-power mode. The woods transform from being just a useful bike route to being a wild land straight out of a fantasy book.

But as more people in Seattle turn to bikes as a year-round way to get around town and bike light technology advances allow for brighter lights to enter the market, nighttime riding has become more and more a topic of arguments. Specifically, there is little consensus about how much light is too much, and how much is too little.

For example, there was a vibrant and sometimes testy conversation on our October post about a Commute Seattle bike light event. And today, a strongly-worded piece by Eric Scigliano in Crosscut claims:

The scariest thing about biking at night in Seattle isn’t the cellphone-jabbering SUV drivers or the bone-crunching potholes … It’s other cyclists — specifically, their high-powered, strobing and flashing headlights, shine straight into the eyes of motorists and other cyclists, transfixing them with disco-ball distraction.

On the other side of the issue, studies suggest that people often feel more visible to others than they actually are. This leads people to have a false sense of security when biking without lights or with completely inadequate lights.

Both of these are problems, but let’s be clear: Neither comes even remotely close to causing as much damage and carnage as distracted driving.

Let’s take a look at both the underlit and overlit issues and what we can do to make everyone safer.

Looking for the short answer about which lights to buy if you’re on a budget but want to be safe and legal? Get the middle ones. I’ve never spent more than $70 on a light, and that one had a super-bright mode I never used because it was a bit on the bright side for my city-biking needs. On the other hand, don’t cheap out and get the tiny, weak lights. Anywhere between $25 and $70 is probably fine. If your light is bright enough to illuminate potholes in the road in front of you, it more than surpasses all legal requirements and is bright enough for a person driving responsibly to see you.

If you want to spend the cash on a higher power or better quality lights, that’s great. Just don’t be afraid of using the low-power settings and definitely don’t use the strobe or blinking setting on trails and dark roads.

Cascade Bicycle Club’s Bicycle Ambassadors have recently been setting up in locations all around the city during dark rush hour times. Their goal is to talk to people about the importance of bike lights. But here’s the best part: If someone passes them and does not have lights, the Ambassadors will simply give them a set.

This is awesome work that solves the problem of “ninja” unlit bicycling at night, one person at a time. The law requires that everyone on a bicycle have a front light and rear reflector during dark hours, but giving people a set of lights is so much cooler than giving them a ticket.

In the past couple weeks, Cascade has given out 60 light sets to people without lights.

I have written several times over the years about the need for more attention to bike lights, especially as more and more people take up bicycling. Unlike an even more divisive issue like bicycle helmets, bike lights actually prevent collisions from happening.

So why on earth are bikes sold without lights in the first place? Could you imagine a car being sold without headlights? Of course not. But unlike some European countries (for example, Germany and the Netherlands), the US never developed complete bike light laws and regulations. The result is that lights are sold as optional add-ons to a bike purchase, not standard features.

Many people take up bicycling because they are low on cash. When you are low on cash, you skip or skimp on the extras. But bike lights are not optional, like fenders or panniers. They are vital safety equipment.

The complete lack of regulation or standards in the bike light industry leads to a ton of confusion. The market is flooded with hundreds of different options rated in different ways (lumens, Watts, number of LEDs) and taking different kinds of batteries. It’s simply confusing, especially for someone on a budget who is just trying to be safe and legal.

To blink, or not to blink

Technically, it is probably not legal to have a flashing headlight on a bicycle. State law allows for a blinking tail light, but not headlight. However, it is commonly accepted that it would be somewhat crazy to give someone a ticket for trying to be more visible to cars while riding a bike. And while I’m not aware of the court history (if any), I would guess that a person who got such a ticket could make a pretty strong case to the judge that they were acting in the interest of self-preservation as best they knew how. But, you probably could get a ticket if an officer really wanted to give you one.

I am actually a fan of using the blinking mode on my normal-strength bike lights during daylight hours and especially at times of day when the sun is in people’s eyes, causing glare on windshields. I don’t have any evidence that blinking is safer during these conditions, but it makes me feel safer. At the very least, I’m sure it’s not more dangerous.

At night, it really depends on the power of your lights (or the level of your batteries). On some busy roads, it might be perfectly fine or even helpful for someone with normal-strength lights to put them on blinking mode. In the end, the choice is really up to you and what you feel is safest. There are so many different kinds of lights out there and so many different kinds of streets that there really is no one rule that works for all situations.

However, on a trail or dark street, blinking front lights can be a menace. There is only one reason I can think of for using the blinky headlight mode while on a trail: Your batteries are about to die (we’ve all been there, right?).

Blinking headlights on trails is especially a problem if you have purchased ultra-bright bike lights.

OMG your light is too bright!

Exciting advances in LED and battery technology has made it possible for extremely powerful lights to enter the consumer market. If you have spent any time on the Burke-Gilman Trail on a recent evening or night, you are surely aware of the problem this causes. Someone biking toward you with a high-power light can actually make it difficult for you to see the trail and the other people using it.

Some European countries regulate the angle of bike lights to make sure, like the low beams on a car, they point toward the ground and not into people’s eyes. But in the US, most bike lights are more like flashlights: They illuminate everything. And sometimes, that’s OK.

What’s often missing from bike light debates is the fact that not everyone is biking under the same conditions. Just like the high beams of a car, a bike light that illuminates everything can be great if you are on a dark trail or road alone. But it’s not good if you are sharing that space with others.

It’s courteous to hold your hand over the top of your light so it doesn’t shine in people’s eyes, and I strongly urge people to get into this habit. But it is a somewhat clumsy solution to the problem that is not likely to be picked up quickly by new trail users.

The other problem is that there is no agreed-upon level at which lights are bright enough to be safe and be seen, but not too bright as to hurt the eyes of other users. Without some kind of standard in the market, it’s nearly impossible for a person who simply wants safe and legal lights to know what to buy.

The rather exaggerated headline for the Crosscut piece calls people who buy ultra-bright lights “bike bullies,” and the story likens them to people who bought bigger cars under mistaken hopes of being safer:

The same impulse leads motorists to buy outsized, top-heavy SUVs which are twice as likely as ordinary cars to flip over, and even more likely to plow right over those ordinary cars in a collision. It’s a sociopathic sense of personal security and a belief that safety is a zero-sum game that can only be won at the expense of someone else’s.

That seems rather harsh. Maybe a couple people bought lights for this reason. But most people with ultra-bright lights simply want to be safe and likely do not realize how their light affects other users. After all, it was sold as a bike light, so why in the world would they think that it’s not actually proper for use on a bike trail?

So, yes. The bike light debate is likely to annoy people for all kinds of reasons because there is no easy and clear solutions that works for everyone. Aside from some kind of quality set of national bike light regulations that I won’t be holding my breath waiting for, what solutions can we pursue?

The city and Cascade Bicycle Club have both made attempts in recent years to educate trail users about different behaviors and courtesy issues, from announcing that you’re going to pass someone to urging people to stay to the right. Perhaps signs telling people to use the steady mode instead of blinking would be a good way to encourage the behavior.

After all, I think a lot of people simply do not realize how annoying or maybe even dangerous it is to have blinking headlights on a trail. And a sign that sets a standard of expected behavior could go a long way to getting more people to keep their lights on a steady mode.

Other signs could maybe urge behaviors like avoiding shining lights in people’s eyes or pointing lights toward the ground. The signs of course won’t solve the problem entirely, but they could be a good start.

Do you have any other ideas?

Founder and Editor of Seattle Bike Blog.
View all posts by Tom Fucoloro →
This entry was posted in news and tagged bike lights, crosscut. Bookmark the permalink.

111 Responses to Is there really a bike light arms race, or are we all just confused about what’s safe?