State transportation proposal is exact opposite of what people want 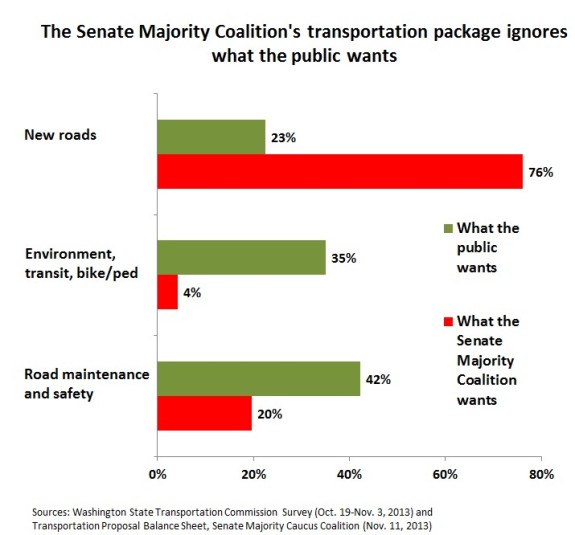 The Senate Majority Caucus Coalition has proposed a transportation package that in no way resembles the desires of Washington residents. If anything, it is the opposite of what people want.

In fact, I’m not sure it’s accurate to call it a “transportation” proposal, since it primarily only funds highway expansions.

Sightline analyzed the data and created the graph above comparing what the state’s own (perhaps not scientific) survey says people want to what the majority coalition is proposing. As you can see, it’s not even close.

But even if we treat the state’s Transportation Commission Survey’s desires as pie-in-the-sky, the proposal is awful even compared to other awful transportation bills we have encountered in recent years. In addition to investing billions in new highways, the proposal would actually reduce funding for biking and walking projects at a time when more and more Washington residents are using their feet and their bikes to get around.

Washington Bikes (formerly the Bicycle Alliance of Washington) thinks that the 2 percent dedicated to vital walking and biking projects should actually be more like 20 percent:

The proposed $12 billion package will spend less than just 2%–two pennies out of a dollar!–on giving you and me alternatives to being stuck in traffic and spending our hard-earned dollars at the pump.

Thursday the State Senate Transportation Committee will hear testimony on this $12 billion transportation proposal. Your legislators need to hear from you today that every day more and more of Washington bikes, walks, and takes transit and a balanced, sensible transportation package will invest accordingly.

This package will guide transportation investment over the next decade. Just some of the reasons we think two cents should instead be two dimes—things you can tell your legislators about why they should dedicate 20% of the new funding to biking, walking, and transit:

Add in the fact that bike/walk projects actually create more jobs per dollar invested than traditional road projects (40%-50% more, one study found), and we think this approach is smart for all of Washington.

Here’s what Cascade has to say about it:

The current package fails to provide affordable transportation options or make it safer to walk, bike and drive. The proposed $12 billion package will spend less than two percent on transit, bicycle and pedestrian projects—projects that that we need.

This flawed proposal would also weaken state environmental laws that are completely unrelated to our transportation system. The Senate’s proposal diverts $280 million away from our toxic waste cleanup fund, eliminates protections for our shorelines, and forces Washington to adopt weaker federal protections instead of the stronger laws of the Evergreen State.

Cascade has created a handy online tool (UPDATE: If that link doesn’t work for you, use the state’s District Finder web tool) to help you contact your legislators and tell them you want a transportation package that adequately invests in biking, walking and transit.