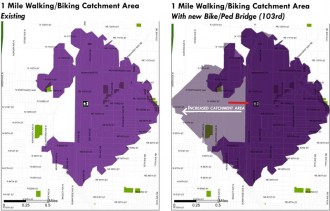 The Northgate walking and biking bridge may no longer be in danger of delays, according to Councilmember and Transportation Committee Chair Tom Rasmussen.

We have reported previously on a still-underfunded plan by the city and Sound Transit to build a walking and biking bridge across I-5 near the future Northgate Station. The bridge — which would dramatically increase the number on homes and destinations within easy walking or biking distance of the station — has strong Council support, and the Mayor’s proposed budget includes funding to begin early design work.

Sounds secure, right? But a proposal briefly under debate by the Council would have pushed $500,000 in funding for bridge planning back from the 2014 budget to the 2015 proposed budget. The $500,000 freed up in the 2014 budget would instead have been directed to the Fauntleroy Green Boulevard project.

The Council’s original proposal document said the $500,000 for Northgate is not necessary in 2014 and can be pushed back to 2015. However, following reporting in the Stranger, Feet First sounded the alarm, saying they were concerned the delay could jeopardize the bridge’s chances of winning grants needed to fill the budget hole in time for it to move forward.

Now, West Seattle Blog reports that Rasmussen is backing off plans to move the Northgate Bridge money, but at the cost of reducing the Fauntleroy Green Boulevard project budget to $1.3 million. Planning for that project is expected to cost $1.8 million, and the proposed budget note cites an intention to fill the hole either during mid-year supplemental budget or in a future year’s budget.

Funding for Fauntleroy would also come at the expense of reducing the sidewalks budget. The updated proposal notes that the city for some reason can’t use that much sidewalk money in 2014. 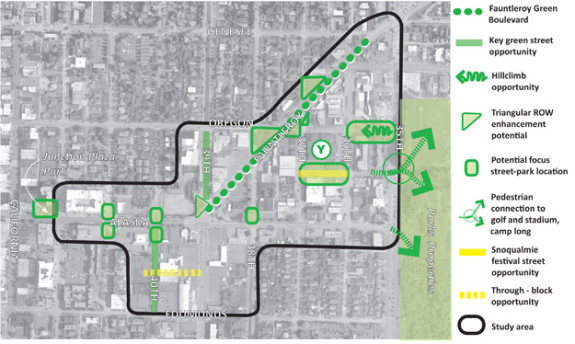 It’s great that the Northgate Bridge funding has been preserved, but it’s frustrating that we have to choose between worthy projects. How amazing would it be if Mayor-Elect Murray secures a sustainable and significant funding source for biking, walking and transit projects? That way, we won’t have to choose between great neighborhood projects, we can just build them all.