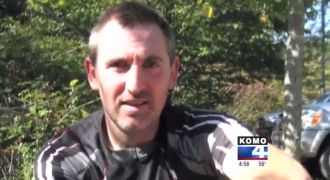 I’ll never forget the first time I saw the number: 42.

That’s how many dollars Nick Natale was fined for veering his work truck onto the shoulder and killing John Przychodzen as he biked on Juanita Drive in the summer of 2011.

I was stunned. I just sat at my computer rereading the notice. I must have been missing something. John was dead, and it was this teen’s fault. There’s no fine that could make that OK, but $42? That’s spit in the eye of John’s friends and family.

Or, as Daniel Duane put it in his recent New York Times op-ed, “the penalty’s meagerness defied belief.”

The ticket was for “unsafe lane change,” and the amount is the same fine that a person would get whether they hit a person or not. It’s as though John’s death was inconsequential in the eyes of the law.

His tragic death came at a strange point in Washington law. The Vulnerable User Law had passed earlier that year, but would not go into effect until 2012. That law was aimed at similar instances in which a person walking, biking or operating another vulnerable vehicle (farm equipment, for example) is killed or seriously injured due to negligence that falls short of criminality. The law gives the legal system powers to suspend the offender’s driver’s license, issue stiffer fines and order relevant community service.

However, as Cascade reported earlier this year, many law enforcement agencies appear to not completely understand how to pursue the law. There is a lot of work yet to be done to make sure the law is properly used, but it is a step closer to making the point that death and injury on our streets is a serious matter.

But other states are worse off than Washington in this regard, and that’s largely the subject of Duane’s op-ed: Is It O.K. to Kill Cyclists?

The nation appears to finally be waking up to the idea that death on our roads is not simply the cost of doing business. It is unacceptable. And just because the person responsible was not intoxicated at the time of the collision does not mean there should be no significant penalty and/or rehabilitation process. From the op-ed:

But when a car hits a bike, it’s like there’s a collective cultural impulse to say, “Oh, well, accidents happen.” If your 13-year-old daughter bikes to school tomorrow inside a freshly painted bike lane, and a driver runs a stop sign and kills her and then says to the cop, “Gee, I so totally did not mean to do that,” that will most likely be good enough.

Unfortunately, despite these few interesting moments, the op-ed is a bit clumsy. For example, Duane suggests there’s a bikes vs cars cultural fight that breaks along urban liberal and suburban/rural lines.

At least one major US city, Indianapolis, has a Republican in charge who is making investments in cycling for Republican reasons. And the whole US Bike Route System is based around the support and economic benefit of small town in rural areas.

Sure, places that were built with only cars in mind are less likely to support bike lanes, but is that really about the same old trite “liberals vs conservatives” framing? I’d say it has more to do with habits and the pan-ideology fear of change than which color your county went in the 2012 election.

Duane also tries to argue that — despite the fact that the majority of fatal collisions between people driving and people biking are the fault of the person driving, according to data from several states — somehow the blame for people on bikes getting killed without repercussions must be shared by people of both modes. Because, you know, some people on bikes break traffic laws:

Laws in most states do give bicycles full access to the road, but very few roads are designed to accommodate bicycles, and the speed and mass differentials — bikes sometimes slow traffic, only cyclists have much to fear from a crash — make sharing the road difficult to absorb at an emotional level. Nor does it help that many cyclists do ignore traffic laws. Every time I drive my car through San Francisco, I see cyclists running stop signs like immortal, entitled fools. So I understand the impulse to see cyclists as recreational risk takers who deserve their fate.

So here’s my proposal: Every time you get on a bike, from this moment forward, obey the letter of the law in every traffic exchange everywhere to help drivers (and police officers) view cyclists as predictable users of the road who deserve respect. And every time you get behind the wheel, remember that even the slightest inattention can maim or kill a human being enjoying a legitimate form of transportation.

This is a frustrating and weak argument that crops up all the time. Yes, people on bikes should obey traffic laws. Yes, people on bikes don’t always do this. But it’s irrelevant to this discussion. For every person on a bike who runs a red light, there’s a person behind the wheel speeding or failing to stop for someone in a crosswalk. It’s a human thing, not a bikes or cars thing.

People break laws, especially when the benefits of obeying them are not made clear through intentional urban design. When a crosswalk is clearly marked and people are reminded of their duty to stop when people are present, the number of people driving who obey the law goes up. Got a spot where people keep illegally crossing on foot? That doesn’t mean that people near that intersection are a band of rebels with no respect for the law, it’s a sign that the street needs a crosswalk there.

If people breaking the law on your street is the rule rather than the exception, then there’s something wrong with your street, not the people. It’s a distraction to suggest that if somehow the tens of thousands of people who bike every day in Seattle (or any city) could somehow all simultaneously stop breaking any traffic laws we would suddenly have the political power to then make our streets safe. That’s a myth.

Make the streets safe, and people will stop breaking the laws so much. That’s a fact. And as a bonus, fewer people will die.