Seattle tops the West Coast in walking and biking to work 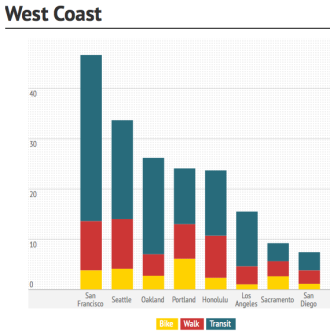 Census data divers at the University of Oklahoma have crunched the data and determined that a higher percentage of Seattle’s workforce walks or bikes to work than any other major West Coast city in the nation.

An impressive 14 percent of Seattle residents walk or bike to their jobs on an average day, just barely higher than San Francisco’s 13.6 percent and Portland’s 13 percent.

Seattle’s impressive biking and walking rates are certainly due in part to the city’s investments in walking and biking infrastructure, but it is also thanks in large part to the city’s ongoing strategy to encourage housing near employment centers.

The numbers also reveal the effect of Seattle’s lagging transit system. When the bike/walk numbers are combined with transit, Seattle places second, far behind San Fransisco and that city’s more advanced transit system. Portland fares even worse when transit is included, coming in a distant fourth behind Oakland.

Among major US cities, Seattle places seventh in bike/walk/transit commutes. As we reported earlier this year, Seattle is now one of only five major cities where fewer than half of workers drive alone to get to their jobs.

Founder and Editor of Seattle Bike Blog.
View all posts by Tom Fucoloro →
This entry was posted in news and tagged census, university of oklahoma. Bookmark the permalink.