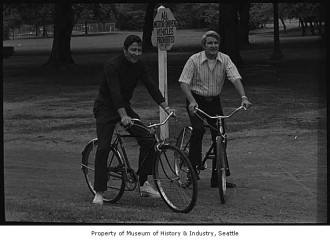 Mike McGinn has certainly done a lot to change the image of cycling in Seattle and to make cycling a more central part of the city’s transportation strategy. That’s why we have endorsed him.

Under his leadership, the percentage of Seattle workers biking to their jobs has grown more than 37 percent, according to Census data.

But if you were to make a list of the city’s most important biking mayors, it would sure be hard to top Wes Uhlman. From the Ravenna Boulevard bike lanes to the Burke-Gilman Trail, Uhlman’s bold leadership took a serious cue from the oil crisis to make serious changes that are still vital elements of cycling in the city and region.

Just imagine what cycling in Seattle would be like today if city leaders kept that momentum going through the following decades.

Knute Berger has the story over at Crosscut:

Uhlman, 34, was elected in 1969, coming into office at the birth of an urban cycling renaissance. At the time, bikes were resurgent with the new environmental consciousness – a young Washingtonian named Denis Hayes had launched the first Earth Day in 1970. They were a green, healthy, do-it-yourself transportation technology, and cycling was bipartisan. Gasoline shortages and rationing meant that even conservatives supported physical exercise and energy conservation. People wanted a bike friendly city that wasn’t reliant on Middle Eastern oil.

Uhlman capitalized on this, pushing for a system of bike commuter routes in the city. He believed that there was a “symbiotic relationship between the biking public and driving public” and that they could and should get along. That was – and is – a challenge: Drivers had long been used to ruling city streets. In the ‘70s, the Cascade Bicycle Club joined the push, lobbying for city improvements and a statewide plan that rested on the premise that the roads were for everyone — cyclists included. Eventually, the club even raised money for a legal defense fund to protect the rights of local bikers wrongly ticketed for using the roads.

Mayor Uhlman and the city council lobbied the state legislature to use gas tax revenues to help make street improvements and build bike lanes. The state passed a bill allowing that in 1972 — the same year Seattle created its first Bike Master Plan. The next year, Seattle opened its first modern “bikeway”, which ran from Green Lake to the University of Washington.

This entry was posted in news and tagged knute berger, wes uhlman. Bookmark the permalink.