In its first full year of operation, the Fremont Bridge bike counter recorded 900,985 trips across the bridge.

December is the only month to dip below 40,000, but that is largely due to holiday travels and the lack of work commutes in the second half of the month, a trend seen in all urban travel modes.

Here’s a graph of the monthly breakdown (note: October is split into two sections, since the counter began operating October 11, 2012): 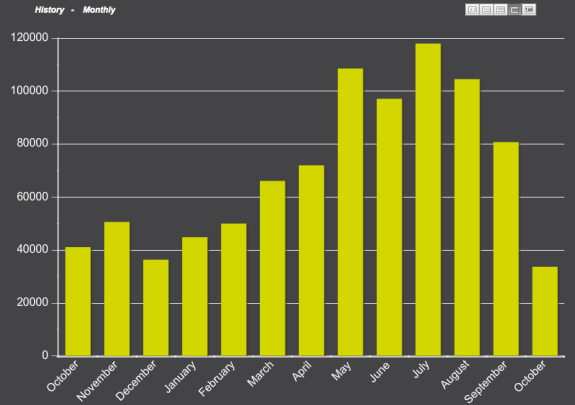 So, as a general rule, the four least bikey months (November through February) see half as many people biking as the four most bikey months (May through August). March, April, September and October split the difference.

That means half of you bike no matter the season or weather. This is actually higher than I had expected, and is certainly higher than many people seem to think (ever heard someone argue against bike projects because “nobody bikes for half the year when it’s rainy?” Not True!)

It also suggests that we have a lot of room to boost these winter cycling numbers, since maybe the rain and brisk weather isn’t as big an impediment as we had thought.

I was definitely intimidated by winter cycling at first. But once I got into the habit of biking every day no matter the weather (and bought warm gloves!), I found that my bike rides actually made me happy and shielded me from dreary moods that can come with too many gray days in a row.

Notice anything else interesting about the year of Fremont bike data? Let us know in the comments below.

This entry was posted in news and tagged bike counter, fremont, winter biking. Bookmark the permalink.