Berger: 20 bike shops on 2nd Ave and plans for bike paths all over the city? Welcome to 1900 Seattle 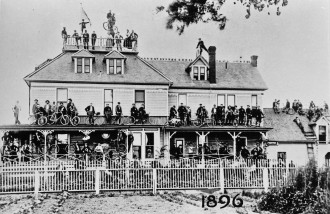 Crosscut’s Knute Berger has started a series about urbanism in Seattle with a piece exploring the first bicycle boom in the city.

Around the turn of the 20th century, bicycling was so popular that an estimated 10,000 of the city’s 80,000 residents rode bikes. This popularity manifested as a powerful political force lobbying the city to pave streets for cycling, streets that would become the foundation for the city’s street network.

In some ways, Berger says, today’s bicycle revolution in Seattle is actually a renaissance. From Crosscut:

Today, as the city puts a new Bike Master Plan in place, we see urban cycling as a forward-looking path toward greater urban sustainability. But this is not the first time Seattle has awakened to the possibilities of a “bike-friendly” urban complex.

1 Response to Berger: 20 bike shops on 2nd Ave and plans for bike paths all over the city? Welcome to 1900 Seattle