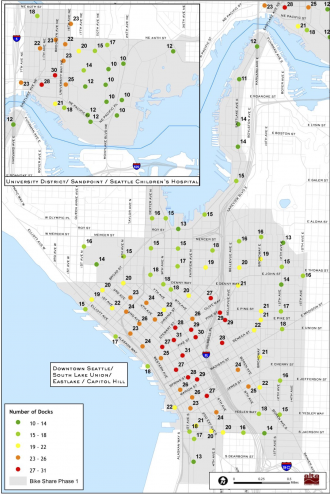 With a 7-0 vote (Burgess and Godden excused), the Council gave a big thumbs up to the public bikes system, which will allow people to check out bikes for short trips from station docks located all around the city center and the University District.

Exact station locations and permits will be decided at a later date, likely in early 2014.

Here’s a statement from PSBS Director Holly Houser about the approval:

“The support of the Seattle City Council is a key element to bike share’s success, and we’re grateful that they have embraced this new option for public transportation. We still have work to do, both in signing up corporate sponsors and ensuring that the local laws work for bike share, but we can move much faster with the broad support of our community. Thanks to their backing, bike share continues to be on track for a spring 2014 launch.”