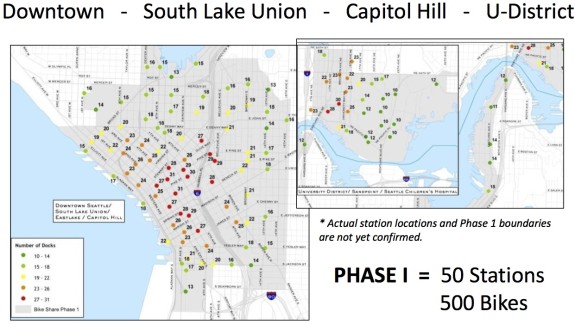 This move brings the bike share one small step closer to reality as the changes move to the full Council for a vote.

During the meeting, PSBS Director Holly Houser also provided more details about the system roll-out, and included the organization’s hope to launch the system in spring 2014. The exact station location details will go to the permitting office likely in 2014 and will involve public outreach to get feedback.

Councilmember Bruce Harrell, who said he is very excited about the system, made sure to confirm with Houser that the city would have the power to revoke a permit if that particular location was not working well. It will.

Houser also gave a little more insight into how the helmet vending system will work. When checking out a bike at a kiosk, users will be asked if they need a helmet. If so, they will pay for it and then the code they are given to check out a bike will also be usable at the helmet machine. She also said return receptacles will be included at stations. The helmets returned will be picked up daily, washed, inspected and returned to use.

You can watch the discussion and Houser’s presentation via Seattle Channel (starts at 39:00):