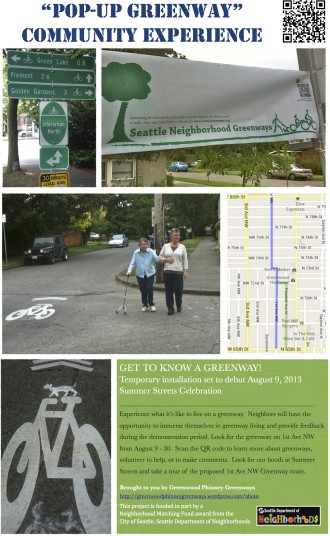 Here’s a brilliant idea: A reusable kit full of neighborhood greenway-like tools that can be installed on neighborhood streets to turn them into something like temporary greenways.

What exactly is involved in a “pop-up greenway?” The plan involves education materials at the start and end points (in this case, on 1st Ave NW between 65th and 80th) so neighbors can learn about what a neighborhood greenway is and see some examples of how the busy street crossings could be made safer.

The kit will also include temporary wayfinding signs in the typical style of the city’s neighborhood greenways, pointing people to good walking and biking routes to commercial centers and nearby neighborhoods.

While there won’t be temporary speed humps or anything like that, there could be some chalk markings and things. I am hoping for something like this, but I doubt that’s in the plans…

The pop-up greenway will be installed Friday during the PhinneyWood Summer Streets celebration and will remain in place until the end of August.

The idea is to give neighbors a chance to know what sort of changes could be included on their street if it becomes a neighborhood greenway. It also gives people a chance to give feedback, like suggesting a better route or pointing out a much-needed repair.

If all goes well, the hope is that the kit could be reused in other neighborhoods.

Funded in part by the Neighborhood Matching Grant from the Seattle Department of Neighborhoods, this project is a first of its kind in Seattle intended to educate the public about how greenways can improve a neighborhood.

Robin Randels of Greenwood-Phinney Greenways said the plan is to test-ride the project for three weeks, learn a few things, then create a more durable DIY Kit that other neighborhoods around the city and county can use before a permanent greenway is built.