Biking and walking funds at risk in Federal transpo budget 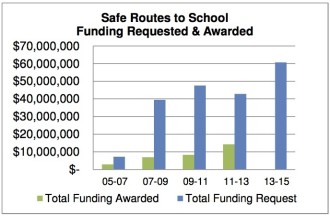 As of a December 2012 report there had been ZERO collisions reported at any of Washington State’s Safe Routes to School project areas since the program began half a decade ago.

It may be impossible to find a government program — especially a transportation program — that is this effective. By spending this relatively miniscule amount of the transportation budget on making streets near schools safe, Washington has undoubtedly saved lives. And not just the lives of children, but also the lives of people of all ages driving, walking and biking through and across the now-safer streets.

The projects also increased the rates of walking and biking to school by an average of 20 percent in communities all around the state, which means students are now safer, healthier and arrive at classes more ready to learn. It also reduces the costs of school transportation, both for the school district budgets and parents’ pocket books in the form of saved car trips to school.

Republican, Democrat, it doesn’t matter. Safe Routes to School is a fantastic use of transportation funds no matter your political or philosophical perspective.

The program in Washington is already dramatically underfunded, with only about 25 percent of proposed projects receiving funding.

Unfortunately, the tiny sliver of the absolutely massive Federal transportation budget that goes to programs like Safe Routes to School and other biking and walking projects (like regional trails) could be at risk in Congressional transportation funding debates that could come to a head today or tomorrow.

The League of American Bicyclists is tracking the budget in DC, and the Bicycle Alliance of Washington is taking the lead here in Washington State. Here are some figures from BikeWA about what loss of this funding would mean to Washington communities big and small (using 2013 numbers as an example):

So act now and make sure your Senators vote no on the proposed amendments that would gut these vital programs.

Following the June end to the Washington state legislative session, the US Congress is now closing out debate before its August recess on transportation budget issues that could eliminate federal biking and walking investments.

Our friends at the League of American Bicyclists are leading the charge to protect Transportation Alternatives program funding – AKA, the federal transportation funding bucket used to invest in biking and walking projects nationwide.

Right now two amendments from Senators Paul and Lee propose to strip Transportation Alternatives funding. Bike League provides an accompanying action alert for you to use to contact Senators Murray and Cantwell.

Please, act now to save biking and walking investments.

For federal fiscal year 2013 Washington state projects are set to receive $12,334,077. About $1.8 million of this goes to the ever-popular Recreational Trails Program, and the rest (approximately $10.4 million) is split up from the state and local governments.

Out of the $10.4 million made available for walking and biking projects, $4.2 million of that is already targeted to about 13 Safe Routes to Schools projects across Washington. This loss of federal funding would stall the growing momentum for making it easier for kids to safely walk and bike to school in Washington state. Bicycle Alliance of Washington is deeply concerned that Senators Paul and Lee’s amendments would propose an amendment that would seek to impose a federal mandate against what Washington state leaders and local communities are seeking – safer streets for our kids and families.

Also, stay tuned on the Bicycle Alliance of Washington Twitter feed tonight. Word is that certain members of the House of Representatives could propose additional attacks on walking and biking investments. We’ll be sending out the most up-to-date information as the night progresses.

This entry was posted in news and tagged bicycle alliance of washington, federal government, league of american bicyclists. Bookmark the permalink.