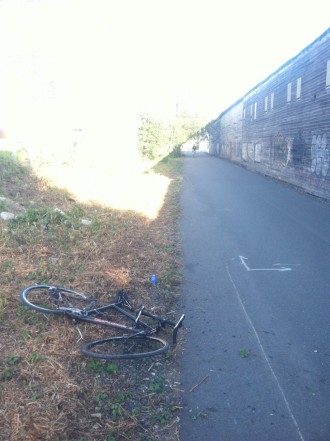 I received an email from a reader with a crazy and terrifying story: He was almost run down by someone driving on the Ship Canal Trail July 13 just west of Seattle Pacific University.

Ryan (he didn’t want me to use his full name because he is not sure about the mental state of this guy) sent the following description of the nightmare incident, which happened on what should be a car-free section of trail near 3rd Ave W.

He was able to escape injury by climbing a fence, but his bike was totaled:

I was involved in a Hit and Run accident on my bike this morning on the Ship Canal Trail. A car was on the trail, and I was almost killed or seriously hurt by what is likely a drunk/high or crazy driver who tried to run me over. No reason, never seen the car or driver in my life. Not much to say right now. Still pretty much in shock by what happened an hour ago near our place. Finishing up a ride going on the bike path, and I was nearly killed by a drunk driver going in reverse on the path. Once he realized he couldn’t get through after he sped down the path in the direction I was going, he stopped and put it in reverse. As he headed back down the path in reverse in his car, I could tell something was weird, as soon as I pulled over on the opposite side of the path he started reversing and aiming in my direction. As soon as I saw this I dropped the bike and ran towards a wall off the side of the trail. Right when I started getting off the bike I could hear him floor the engine and was probably going 25-30mph when he ran over my bike, as I had just reached the wall and was climbing over the railing (no idea how I did that so quick, adrenaline). 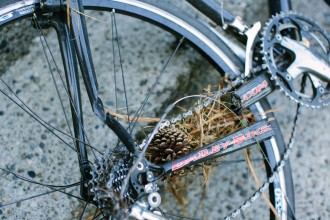 At that point I was in total shock, didn’t know how the hell that just happened or why. The driver never braked and just took out my bike, if I didn’t pull to the side and jump off who knows what condition I would be in, considering he made no attempt to even stop as he was dragging my bike. Right after he just sat there on the trail maybe 30ft from my bike. I tried to get my phone out of my jersey but couldn’t get it out, and I saw him through some parked cars up on the upper part where I jumped onto. 55-65yr old white man, plaid shirt, wire glasses, driving a late 90’s white jeep grand cherokee. This was on the Ship Canal Trail between 3rd and 6th avenue (right near SPU and the Ship Canal. Cops came and took a report, but neither me or the really nice neighbor who came down and also gave a report to the police got a license or photo. The police will likely write it up as attempted vehicular assault, this was at about 7:30am this morning. My poor Bailey is totaled for sure, but feeling really scared and also lucky. Don’t know what else to say.

So keep an eye out for this guy, and be sure to contact police if you have any information.

Founder and Editor of Seattle Bike Blog.
View all posts by Tom Fucoloro →
This entry was posted in news and tagged crime, ship canal trail, spd. Bookmark the permalink.