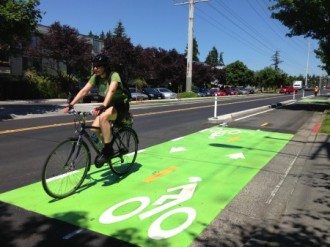 I’m still on vacation in Denver, so we will have more coverage of this soon. But for all you who are super eager to try out Seattle’s newest and longest protected bike lanes, the city has announced that the Linden Ave project is now essentially complete.

The city will celebrate the opening July 13 at 10 a.m., so mark your calendars if you’re into that kind of thing. Also note that one section will still be closed due to a private development along the route.

Linden Avenue North between North 128th and North 145th streets is a fabulous new version of itself – awaiting a unique artwork installation in early July to call the “Complete Street” a completed project. Part of the newly neighborhood friendly Linden Corridor is the City’s first urban cycle track – modeled after designs in Vancouver, British Columbia. The two-way cycle track on the eastern side of the street features green boxes at intersections and driveways to raise awareness of bicycle travelers. 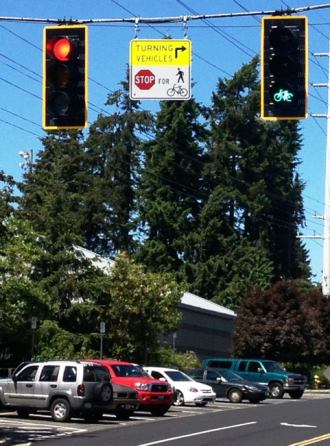 The special green thermal-plastic pavement treatment is much longer lasting than standard road paint, making it a good safety investment.

Another safety measure along the cycle track is a special bicycle signal at North 130th Street. The bicycle signal turns green prior to the vehicle signal; this allows the cyclist to enter the intersection so that right-turning vehicles see the cyclist before making a right-hand turn (a common bicycle/vehicle risk). In addition, southbound vehicles have their own left-turn phase, during which time the bicycle signal is red.

Other new sites along the corridor include some temporary educational road signs, telling bicyclists how to use the bicycle track, among other things. The goal of the educational signs, area posters and flyers is to make the new 2-way cycle track configuration something travelers are aware of and understand. The signs look something this… 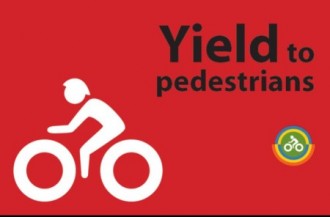 One other thing to be aware of, a private development at the intersection of Linden Ave North & North 141st Street will temporarily block a portion of the cycle track until early August. That said, the project team is still planning a big Linden Complete Street Celebration July 13, 10 a.m. to noon! Look for details soon…

Founder and Editor of Seattle Bike Blog.
View all posts by Tom Fucoloro →
This entry was posted in news and tagged cycle tracks, linden, sdot. Bookmark the permalink.

31 Responses to The Linden Ave cycle track is now complete