Can we declare a truce in the age-old ‘bike lanes vs vehicular cycling’ fight? 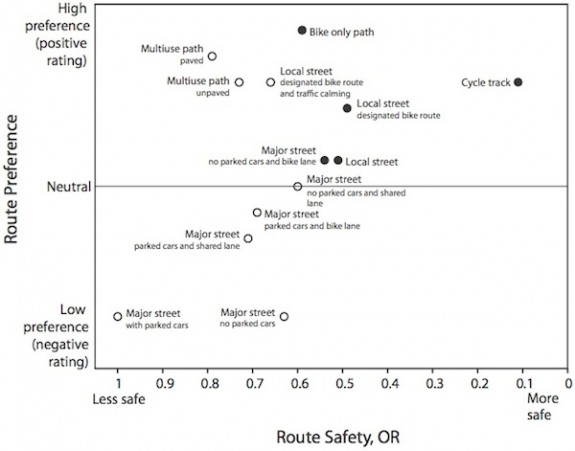 Study after study in recent years has shown exactly what might be common sense to the average person: Bike lanes protected from heavy traffic are safer. Not only that, but more people choose to get around by bike once a protected bike lane is installed.

The reason really is not complicated. There is something inherently human that tells us riding a bike in the same lane as fast-moving cars and trucks is dangerous. Biking with traffic can be learned, and it can be done with reasonable safety. But only a small percentage of people will ever want to try it, let alone make it a daily habit. Most people see someone biking down Rainier Avenue and think, “That person is crazy.”

But beyond the many people who choose not to try it, biking in heavy traffic is not an option for children or people with mobility issues that prevent them from being able to cycle quickly. If no other argument in favor of safe bike lanes convinces you, the need to make our streets safe for people of all ages and abilities should.

We know this very clearly in Seattle, where decades-old and well-established “vehicular cycling” education programs and cycling clubs were not enough on their own to get everyday cycling levels much higher than a couple percentage points. But they have been extremely successful at embedding safe cycling practices into Seattle’s cycling culture. They are also a huge reason why Seattle driving culture is so much more patient and friendly to people on bikes than most other US cities.

Be assertive, take the lane, ride your bike like a car. These are vital skills for navigating our city even to this day. But the number of residents cycling did not start to increase significantly until the city started calming traffic and installing bike lanes. The percentage of people using bikes as their primary mode of transportation to work has grown by two-thirds since the city adopted the 2007 Bicycle Master Plan. During the same time period, the collision rate dropped by more than one third. Once the city started to send the message that cycling is a real and valuable part of our transportation network by carving out road space for it, the people responded. 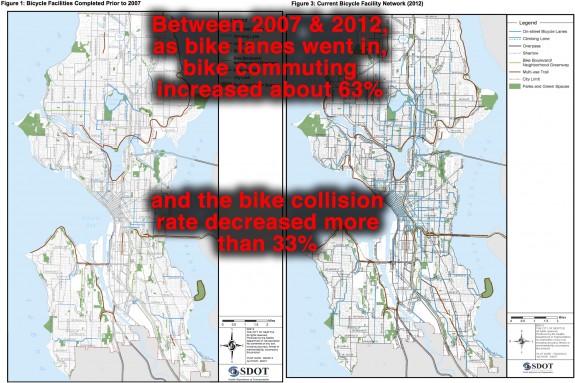 But not everybody who bikes thinks bike lanes are a good idea. Some of the biggest forces fighting the installation of bike lanes in cities across the nation have not been freight, NIMBYs or angry car owners. It’s been from people who ride bikes and think bike lanes are more dangerous than simply biking like any other roadway vehicle.

This gets us to the old bike lanes vs vehicular cycling debate, in which people dug their heels into both sides of the argument, seemingly prepared to starve each other out. In the past decade, momentum has clearly and decisively shifted to the side of installing bike lanes and other infrastructure that has long been used in Europe and modern cities across the world. More and more, arguments from dogmatic vehicularists have become easier to simply ignore as support for bike lanes has become overwhelming among the general population.

That’s why I was caught off-guard by a recent blog post by Bicycle Quarterly’s Jan Heine. Heine isn’t some mindless drone following every word of John Forester’s Effective Cycling tome like it’s a holy document. He is a dedicated writer and randonneur who, in addition to the quarterly, has written several books about the history of bicycles and the art of handmade bikes. In short: I like his work and he seems like a nice guy, which is at odds with the phony Forester-acolyte archetype I have invented in my mind.

Heine, who lives in Seattle, is not a fan of the under-construction Linden cycle track. Basically, he says that the cycle track puts people on bikes off to the side and out of sight of cars. This, he argues, puts them in undue danger from turning cars. (To be clear, the cycle track is not finished. Still yet to come: Signage, green paint for driveways and crossings and completion of a still-missing section. It should be finished in June, according to a recent SDOT press release).

To support his argument, he cites an old study out of Berlin (1999 I think, though I admit I cannot read German like Heine can) and pulls out some vehicular cycling talking points I have heard over and over: Being struck from behind is the cause of a low percentage of cycling accidents, bike lanes are the first step to losing the right to bike in the road and, my favorite, that Nazis invented bike lanes to get bikes out of the way.

But dig deeper and you find that his opinions are more nuanced, as I suspect is common among the many people who still adhere to these talking points. In the comments, Heine moderates a great conversation that, I think, moves the conversation closer to points of agreement than the same old fight of yesteryear. For example, in response to one comment pointing to data from Belgium, Heine writes this:

That is interesting data. It supports my idea that with increasing car speeds on a road, the degree of separation should increase:

– On neighborhood streets, it’s safest with no facilities at all and speed limits of 30 mph or lower.
– As speed limits get higher, you first want a painted bike lane.
– Once the speed limit goes above 30 mph, you really need to separate bikes and cars.

I couldn’t agree more! In fact, it sounds a lot like this graphic. Elsewhere in the comments, he discusses the idea that infrastructure can be done right, but it often requires inconveniencing cars more than Seattle is politically willing to do. But stopping short of making a facility truly safe is not acceptable. Again, I agree.

A big sticking point that he mentions in his post is one that many people fighting against bike lanes voice: If we build separated bike lanes, we will lose our hard-fought right to bike in the road. I would not support such a law, either.

So, here’s my suggestion for vehicular cycling folks and those who fight against them: Let’s come up with a list of things we can agree on and work together. The fight is over, bicycle facilities are coming to Seattle. Let’s regroup, lick our wounds, let bygones be bygones, drop ALL future Nazi and KKK references, and see if our dreams don’t actually look more similar than different.

As a starting point, here’s a list of points I think just about everyone can agree on. Have something to add/modify? Discuss in the comments.

Founder and Editor of Seattle Bike Blog.
View all posts by Tom Fucoloro →
This entry was posted in news and tagged vehicularists. Bookmark the permalink.

50 Responses to Can we declare a truce in the age-old ‘bike lanes vs vehicular cycling’ fight?