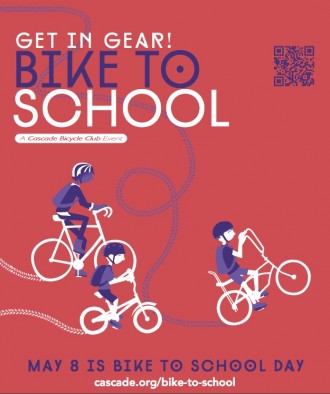 Wednesday is Bike to School Day, and it could very well blow the doors off every previous bike to school celebration in Seattle.

For one, the Seattle School District has put its full support behind the bike to school effort. Superintendent Jose Banda will be part of a big bike train to Bryant Elementary, and the district recently issued a memo urging all staff to engage students and school communities about biking to school and organizing group rides to class.

To put this in perspective, there are many communities in the US where kids are not even allowed to bike to school. Some parents have even found themselves mired in legal trouble just for allowing their kids to pedal to class.

There will be Bike to School Day celebrations all over the city Wednesday, but press activities will be at Bryant Elementary. Details from Cascade:

What: Bryant Elementary school students, family members and public officials to bicycle en masse to school and hold a press conference about biking to school

Seattle isn’t the only place in the state diving into Bike to School Day. The new WSDOT Director also sent out a statement recently urging communities across the state to encourage biking to school:

“Bike to School Day promotes bicycling for transportation and helps build healthier communities,” said Secretary of Transportation Lynn Peterson. “Events raise awareness of the benefits of bicycling and walking, such as increasing physical activity among children and reducing traffic congestion and vehicle emissions in neighborhoods. They also draw attention to the need for children to have safe places to walk and ride.”

In previous years, National Bike to School Day was held the same day as Bike to Work Day and often went overshadowed. Organizers hope that giving it its own day will draw more attention to the issue.