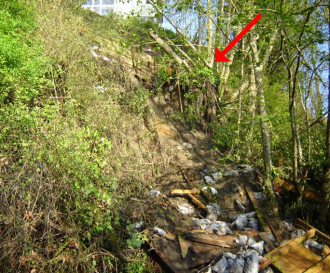 A mudslide that has continued to create hazards on the Burke-Gilman Trail in Lake City will be fixed, Parks officials said Wednesday.

The owner of the private home on top of the cliff where the slide began had not been located after several days of trying, so Parks workers will take emergency action to protect the trail from dangers caused by the slide.

Expect delays and detours during the work. And if you know the person who owns that house, you might want to tell them to fix their timber wall.

From the Parks Department:

Seattle Parks and Recreation will begin work immediately to remove debris and temporarily stabilize the adjacent hillside at the site of a landslide, which occurred on Sunday, April 21, on the Burke-Gilman Trail at NE 117th and Riviera Place NE at Lakeside Place NE.

Since the homeowner of the property where the slide originated is out of town, the Parks Engineer declared a public safety hazard that will allow the City to begin work immediately.

The slide was caused by the failure of a timber wall on private property above the trail. A portion of what remains of the wall is resting against, and is supported by, a clump of trees directly above the Burke-Gilman Trail.

Early on Thursday, April 25, Parks heavy equipment and tree crews will park a 135-foot boom lift on the trail to provide tree removal specialists access to the cluster of trees that is in imminent danger of falling down onto the trail. Parks staff will trim off branches and trunks, but will leave the stumps in place. This will help to stabilize the current situation by reducing the weight on the compromised hillside.

This action will not remove the remnants of the timber wall, or permanently stabilize the property.

Tree crews will also trim the branches on Parks-owned trees farther down the slope as needed to mitigate potential hazard to trail users and to Seattle City Light power lines. After the tree work is complete, crews will clear slide debris from the trail.

Work is expected to be complete by the end of the week. A detour around the slide area is marked.

This entry was posted in news and tagged burke-gilman trail, lake city, parks and recreation. Bookmark the permalink.