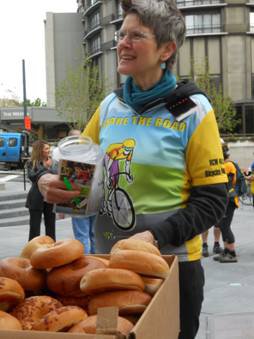 Barb Culp, former director of the Bicycle Alliance of Washington, has been honored with a Lifetime Achievement Award by the nationally-focused Alliance for Biking and Walking.

Culp lead BikeWA for many years, but her work has stretched well beyond the borders of Washington State.

Barb Culp may have retired as the executive director of the Bicycle Alliance of Washington, but she has remained active in the bicycle movement. Earlier this month she was honored at the National Bike Summit when the Alliance for Biking and Walking presented her with a Lifetime Achievement Award.

In a blog post about their 2013 Advocacy Awards, the Alliance noted:

Washington State has been ranked the best state for biking by the League of American Bicyclists for the past 5 years, and this is due in no small part to the influence and leadership of Barbara Culp. Barb has been a leader in biking advocacy for decades. She has been thee executive director of Bicycle Alliance of Washington twice, for a combined 13 years, as well as previously working for Cascade Bicycle Club as their education director and promoting bicycling and walking as commuter solutions at Seattle Children’s Hospital. Her leadership has led to increased bicycle infrastructure in Washington, better education for all users of the road and increased communication between bicycle advocates and Washington DOT.

“This award comes as a complete surprise to me. I am thrilled and pleased to be recognized by my peers at the national level,” remarked Barb, who also served on the board of directors for the Alliance and was the vice-chair for part of her tenure.

Cascade Bicycle Club announced Monday that the club hired Emily Kathrein to be their new Field Programs Manager. The position is new for the club, but fills part of the void left by Max Hepp-Buchanan, who is now working in Richmond, Virginia.

Since Kathrein will be working specifically with the club’s on-the-ground operations, you may just run into her. Here’s a bit about her from Cascade:

Emily brings an impressive history of success in organizing, both in college in Iowa and as the Youth Vote Director for Organizing for America, and we’re happy to have her.

A true Midwesterner, Emily grew up in Omaha, Nebraska.  She attended Iowa State University where she received her BA in Advertising and Art&Design, as well as a crash course in bicycle touring on RAGBRAI (Register’s Annual Great Bike Ride Across Iowa).  After completing her first RAGBRAI, Emily took touring to the next level with a cross country cycling trip to help raise money and awareness for affordable housing. The 4,000-mile ride from coast to coast is Emily’s biggest cycling accomplishment to date, but she has plans for more trips in the near future.

Before Cascade, Emily worked as the Youth Vote Director with the Washington State Democratic Party. In her free time she loves to cook, run, draw, be on/in the water, see live music and try new foods.