Seattle Bike Expo this weekend: What’s there (and how to get there) 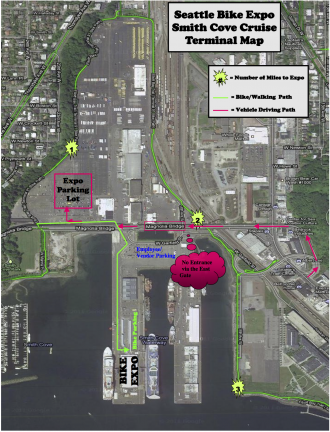 But first, the biggest question we get every year about the Bike Expo is: What is a “Smith Cove,” and how the hell do I get there?

Well, to the right you will find a handy map showing you how. If you are coming from the north, it’s pretty straight forward (assuming you know how to get to the Elliott Bay Trail from 20th Ave W. Hint: Turn left where it says “Dead End.” What’s so confusing about that?).

If you’re coming from the south, you’ll actually be able to see the cruise terminal, but still have three miles to bike before you get there. Luckily, it’s a fairly nice ride and people will be stationed along the way to help you find the way along the trail, through the parking lot, past the terminal workers who yell at you for “biking on the street,” through the Shrine of the Silver Monkey, and finally to the Bike Works-staffed bike parking coral. I would not suggest taking transit unless you are in the mood for a very long walk.

Whew. So now you’re in the Expo. What’s there to do?

But the event that will undoubtedly steal the spotlight at the Expo is Sunday at 1:15 p.m. when yours truly will make my world debut as a panel moderator discussing “How Seattle bicycle advocates, City staff and elected officials work together to complete projects.” I will be joined by Cascade’s Craig Benjamin, City Councilmember Mike O’Brien, SDOT’s Kevin O’Neil and West Seattle Bike Connections’ Don Brubeck, and we will discuss how all these different parts of the city (small and large advocacy efforts, the city, the media and politics) work together (or don’t) to make the city better for cycling (or not).

It’ll be a barn burner that I hope ends in a performance gel, energy bar and protein shake food fight.

Be sure to check out the full schedules for Saturday and Sunday. Cost of entry is $10/day or $12 for the weekend.

Founder and Editor of Seattle Bike Blog.
View all posts by Tom Fucoloro →
This entry was posted in news and tagged cascade bicycle club, seattle bike expo 2013. Bookmark the permalink.

4 Responses to Seattle Bike Expo this weekend: What’s there (and how to get there)